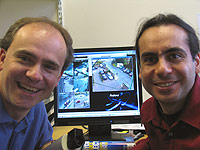 Experts from Kingstonâ€™s Digital Imaging Research Centre have embarked on a major project to improve the way closed circuit television is used in the battle to keep guns off Britainâ€™s streets. Drs Jean-Christophe Nebel and Dimitrios Makris have secured Â£186,590 of funding from the Engineering and Physical Sciences Research Council to develop a CCTV system able to pinpoint the behaviour of people carrying concealed weapons.

Working in partnership with academics from Loughborough, Brighton, Liverpool and Sunderland Universities, the Kingston researchers will play a key part in developing intelligent software capable of monitoring body language and reactions. The three-year Multi-Environment Deployable Universal Software Application (MEDUSA) project is backed by the Metropolitan Police and the Firearms Partners Group and has a total budget of Â£620,500.

Existing technology only provided operators with the scope to detect weapons if they were somehow visible on camera, Dr Nebel said. The new product would allow CCTV systems to automatically scan footage, searching for tell-tale signs that might indicate a person was carrying a firearm and bringing them to operatorsâ€™ attention if necessary. â€œThis will mean operators will be in a better position to alert police more promptly about the possible presence of a firearm and give officers additional time to respond to a potential incident,â€ Dr Nebel said.

The first phase of the cross-institutional collaboration will involve psychologists at Loughborough studying genuine CCTV footage of people carrying hidden weapons to examine their demeanour in the lead-up to gun-associated crime. Posture, movement and eye contact with cameras will all be scrutinised. Once the information has been analysed, it will be passed to digital imaging experts at Kingston and Loughborough who have been charged with developing the identification software.

The project was particularly important since the number of firearm-related offences in the United Kingdom had been growing since the mid-1990s, Dr Makris said. Home Office statistics showed there were almost 11,000 such incidents recorded in England and Wales between 2004 and 2005, up 6 per cent on the previous year. â€œWe hope to develop technology that will eventually be applied to the network of 6,000,000 cameras already in place in the United Kingdom, providing an easily-implemented and effective means of helping tackle a problem of national concern,â€ he said.

Kingstonâ€™s Digital Imaging Research Centre is held in high repute for its pioneering research in visual surveillance. Other advances in the use of predictive CCTV systems have already been trialled on the underground and rail network.