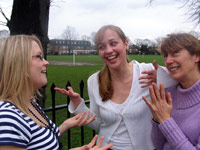 Three drama graduates have been so inspired by their Kingston degree studies that they have launched their own theatre company. Anni Rhodes, Charlotte Johnson and Nicola Stockley have joined forces to take a range of original work to the stage. Performing as the Whyâ€™rd Theatre Company, they have already earned critical acclaim for their production of Hidden Identity, one of the highlights of the Think in Kingston festival in March.

Ms Rhodes, who has penned the companyâ€™s first productions, still finds it hard to believe the direction her life has taken. After raising her family and running her own business, she enrolled at Kingston intent on majoring in English. However, a chance visit to the School of Performance and Screen Studiesâ€™ Reg Bailey Theatre during her first day on campus put paid to those plans. Before she knew it, she was setting to work on a drama degree.

The three Whyâ€™rd members formed a firm friendship during the course of their studies. â€œWe performed in nooks and crannies all over campus which provided a wonderful opportunity to hone our technique and were even part of a production at the Edinburgh Festival,â€ Ms Rhodes said. â€œBelonging to the Performance Initiative Network run by Kingston with a group of partner London universities also gave us tremendous scope to develop our work.â€

The Head of the Universityâ€™s School of Performance and Screen Studies, Frank Whately, is not surprised the trio has moved on to the professional circuit with such ease. â€œAnni, Charlotte and Nicola are among Kingstonâ€™s best drama graduates and Iâ€™m confident their talent will see them make a name for themselves in acting circles,â€ he said.

The company members are now gearing up for their next performances during the Leatherhead Drama Festival this month. Meanwhile, Ms Rhodes is also immersed in writing her fourth script, a childrenâ€™s play the company hopes to take on tour around schools.