High-flying inventorâ€™s design set to take to the skies

High-flying inventorâ€™s design set to take to the skies 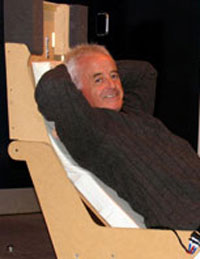 Cramped conditions in economy class could be about to become a thing of the past for holidaymakers. A new aircraft seat, which has just been voted British Invention of the Year, could revolutionise air travel offering passengers a more comfortable alternative. The brainchild of interior designer Dominic Robinson, who created the device with help from experts at Kingston Universityâ€™s Enterprise Exchange, the seat will help in the battle to reduce deep vein thrombosis by giving travellers more space on long-haul flights. A fresh take on the traditional aircraft seat, Mr Robinsonâ€™s invention will give passengers the opportunity to stretch out without bumping into the seat in front and lie back in comfort.

Mr Robinsonâ€™s design will give passengers the scope to adjust their seat into a more comfortable resting position to sleep, thanks to a unique tilting mechanism which moves the seat without altering the position of the main frame of the chair. Judges at the British Invention Show were so impressed with the concept that they singled it out for their top Diamond Award. Mr Robinson is now in talks with a major seat manufacturer interested in piloting the concept and, if all goes to plan, the aircraft seat could be in the air in about 15 months time.

Mr Robinson, a graduate of Kingston Universityâ€™s predecessor Kingston Polytechnic, created initial drawings and computerised models for the design. The father-of-four then got in touch with staff at Kingston University and worked with its Enterprise Exchange which specialises in helping budding inventors get their ideas off the ground. University experts helped Mr Robinson secure a grant and put him in touch with staff and students at the Faculty of Engineering who helped build a concept model and analysed how the seat would respond to a number of computer simulated flight conditions. Kingston student Neil Connor, who has just completed an MSc in Virtual Product Design Engineering, carried out the computer tests to take the project forward. â€œWorking on the project helped me to use my skills in a real situation which will look great on my CV, especially once the aircraft seat takes to the skies,â€ the 29 year old said. â€œI canâ€™t wait to tell people I was a part of the design that could signal a major change in air travel.â€

Mr Robsinson was one of eight inventors working with the University who clocked up wins at the British Invention Awards. The Universityâ€™s haul included a platinum award, double gold award, four gold medals and a silver medal. Kingstonâ€™s Director of Enterprise Marguerite Lipscomb, says the pioneering partnership between academics and inventors made possible through The Virtual Company scheme which is run by the Universityâ€™s Enterprise Exchange has helped many designers make the leap from the drawing-board to the production process. The links have also led to a string of awards. â€œSo often we are contacted by people with marvellous ideas but who lack the business know-how to get their project off the ground,â€ Mrs Lipscomb said. â€œBy offering expert advice and helping designers to access funding and tap into state-of-the-art facilities, we can help them to achieve their goals. It is a way of sharing the Universityâ€™s expertise, not only with students, but also with businesses in the wider community so that they can come up with innovative solutions to age-old problems.â€ Mr Robinson credits the University with helping him get a step closer to achieving his goal to transform air travel. â€œGetting help from people who back your idea along the way is exceptionally important to turn that dream into a reality,â€ he said.

Kingston University is well known for its excellence in aerospace engineering. Director of undergraduate study Dr Peter Barrington predicts that the aircraft seat will generate strong interest in the industry. â€œFreeing up more leg room and reducing the weight of seats which go into aeroplanes is an area aviation experts are really interested in at the moment,â€ he said. â€œThis design has enormous potential to make a real difference to the future of travel in our skies.â€Â