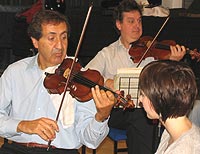 Music students have started the academic year on a high note after four critically-acclaimed classical performers took centre stage on campus to conduct one of their first lectures. Cellist Philip De Groote, violinists Levon Chilingirian and Charles Sewart and violist Susie MészÃ¡ros, who have soared to international stardom since forming the Chilingirian Quartet in 1971, visited the Coombehurst Studio at Kingston Hill to outline the finer points of stage presentation.

Part of the School of Performance and Screen Studiesâ€™ induction programme, the masterclass gave students the chance to assess the quartetâ€™s interpretation of a selection of works by composing greats. They were also able to quiz the instrumentalists about the way both their individual techniques and collaborative approach had evolved during the course of their careers.

Principal lecturer Dr David Osbon said the opportunity to interact with and learn from world-class musicians at such an early stage in their studies had been a motivational experience for the undergraduate audience. â€œThere is no better way of gaining an insight into performance processes than by being in the presence of artists who are recognised as some of the most accomplished in their field,â€ Dr Osbon added.Â

Founded by Cypriot Levon Chilingirian and South African Philip De Groote, the Chilingirian Quartet holds a Royal Philharmonic Society Chamber Ensemble Award. It is quartet-in-residence at the Royal College of Music in London, has a top billing at the annual Lake District Summer Music Festival and, in 2005, spent a period based at the University of California, Irvine. The musicians have recently embarked on research into the works of Haydn, who is widely regarded as the father of the symphony and string quartet, and hope to introduce 54 of his previously unknown compositions into the public arena.Â

Mr Chilingirian said the masterclass had been enormously beneficial for everyone involved.Â  â€œWe relished the opportunity to be able to pass on our extensive knowledge about performance preparation to such a talented set of young musicians. In return, they provided us with some invaluable insights that we will definitely draw upon to expand the intellectual element of our research,â€ he said.

Music aficionados also had a chance to sample the quartetâ€™s performance prowess at a sell-out concert in the Great Hall at Hampton Court Palace. Organised as part of a joint venture between the University and Palace, the programme coincided with celebrations marking the 250th anniversary of Mozartâ€™s birth.