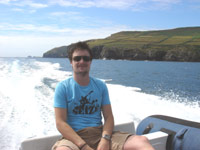 No two days as harbourmaster based at Port St Mary on the Isle of Man were ever the same for Ben Platt.Â  One minute he could be rescuing a cat stranded on a sand bar by the rising tide – and ending up in hospital with a torn ear for his trouble – the next offering advice to sailors about to set out for a dayâ€™s sailing.Â  But dealing with a serious oil spill in February 2003 was the catalyst that prompted Ben to make a life changing decision to switch career and study environmental hazards and disaster management at Kingston University.

When the heating tank of the local power station at Douglas burst contaminating the harbour, bay and adjoining rivers with oil, it was his responsibility as harbourmaster to contain the spillage.Â  Not only did he have to get it cleaned up with minimal impact on the environment, he also had to get the harbour back to working order as quickly as possible.Â  â€œAn oil spill is a messy clean-up job and can have a detrimental effect on marine life,â€ Mr Platt said. â€œA number of fish and mammals live within the harbour and the longer the oil remains in the water the greater the chance they will face serious health problems.â€Â

Little did Mr Platt realise that the incident would fuel his fascination with natural and man-made disasters, inspiring him to enrol on Kingston Universityâ€™s BSc in Environmental Hazards and Disaster Management. â€œBeing a harbourmaster was great but it could be quite an isolated role so I was looking to move on and make use of the experiences I had gained in the job,â€ Mr Platt said.Â  â€œIâ€™m just starting the second year of the course but now I know Iâ€™ve made the right move.Â  The content is fascinating and Iâ€™ve already decided I want to specialise in environmental disasters.â€Â  Long-term Mr Platt hopes to be skilled enough to be part of a team flown into disaster zones to help with recovery operations.

Principal lecturer Dr Neil Thomas, from the Universityâ€™s School of Earth Sciences and Geography, has seen an increase in popularity in this subject since the environmental hazards degree launched in 2003. â€œWith disasters such as the 2004 Indonesian tsunami and Hurricane Katrina in the headlines, there is growing interest in how we can predict these events and deal with the aftermath,â€ Dr Thomas said.Â  â€œOrganisations in the frontline of clean-up operations are looking for staff who have been trained specifically in environmental hazards and disaster management.â€Â  The course combines field research projects and scenario exercises with lectures to give students a scientific understanding of the causes and effects of natural environmental hazards. It equips them with the appropriate technical and people skills to monitor, manage and help prevent potential disasters.