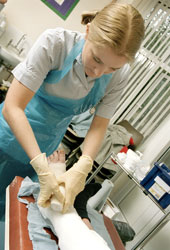 Hundreds of staff, students and graduates have been toasting the success of the Faculty of Health and Social Care Sciences, which celebrates its tenth anniversary this year.Â  Established following a special request from the National Health Service, the Faculty, run jointly by Kingston University and St Georgeâ€™s, University of London, is responsible for delivering one of the largest NHS training contracts in the country.

First Dean Professor Mike Pitillo who is now Vice-Chancellor of the Robert Gordon University, recalled that health service officials had been keen to find a new University such as Kingston capable of working in partnership with a traditional university such as the then St Georgeâ€™s Hospital Medical School. â€œInitially, the NHS wanted the two institutions to provide nursing and midwifery education. The proposal involved a whole new way of working and took a year of complex negotiations before a joint venture agreement was signed in January 1996,â€ he said.

During the past decade, the Faculty has undergone significant expansion. It took over responsibility for diagnostic and therapeutic radiography from Kingstonâ€™s Faculty of Science shortly after its inception, and soon afterwards also acquired social work, previously based within the Kingston Business School. Further growth came with a new contract for physiotherapy in 1997. Since those early days, the Faculty has made a significant impact on the health and social care workforce, not only in the region but also across the wider United Kingdom, training approximately 5,000 nurses, 600 midwives, 600 physiotherapists, 400 social workers and 280 radiographers. More recently, it has added a Foundation Degree for paramedics to its portfolio.

The Principal of St Georgeâ€™s University of London, Professor Michael Farthing, puts the success of the partnership down to a winning combination of teaching excellence and cutting-edge research. â€œWhat the Faculty has achieved in 10 years is nothing short of amazing,â€ he said. â€œThe partnership draws on the strengths of both institutions and has remained true to its commitment to working within the NHS to provide education that supports changing service needs.â€

Current Dean Professor Fiona Ross said staff had no intention of resting on their laurels. Instead, they had ambitious plans for the future which included finding ways to ensure even greater numbers of people were able to train for careers in health and social care. This would be achieved through the implementation of access programmes similar to those already developed with South Thames, Croydon, Kingston and Merton Colleges and the expansion of pre-hospital care training schemes with regional ambulance services, she said. Research development was also a top priority. â€œWe are particularly excited by the potential for major advances in teaching and research to emanate from a new three-way alliance in which Kingston and St Georgeâ€™s will work more closely with Royal Holloway, University of London,â€ Professor Ross said.