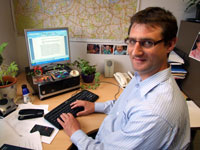 A senior Kingston University psychology lecturer has carried out ground-breaking research into how intellectually disabled children, who are the victims of physical or sexual abuse, react during police interviews. Dr David La Rooy has teamed up with Dr Ann-Christin Cederborg at Linkoping University, Sweden, and Professor Michael Lamb at Cambridge University to carry out the study, which was designed to see whether children who spoke to officers on different occasions revealed new or different information about what had happened to them.

Â â€œIt is extremely difficult for the police and Crown Prosecution Service to get such cases to court let alone to secure a guilty conviction because defence lawyers will always pick up on any inconsistencies in the childrenâ€™s accounts,â€ Dr La Rooy said. â€œWe wanted to test whether children in these circumstances who were given the opportunity to talk to the police again would become more communicative and remember further details.â€

Dr La Rooy and his team examined 20 cases reported to Swedish police involving sexual and/or physical abuse of children with disabilities ranging from developmental delay to Attention Deficit Hyperactivity Disorder (ADHD) and autism. By comparing the childrenâ€™s responses in both initial and later interviews, they were able to assess the essential information provided in both.

This showed that when children with intellectual disabilities were given a second chance to provide information about their abuse, they were often able to give more details about what had occurred, he added.

Dr La Rooy said the research could have implications for how these types of cases were handled in the future. â€œWeâ€™re hoping it might eventually prompt a change in policy to encourage investigators to provide more than one opportunity for children with intellectual disabilities to talk about abusive experiences,â€ he said. â€œThis may help maximise the number of useful leads.â€