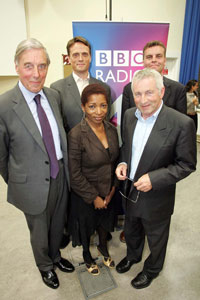 Veteran broadcaster Jonathan Dimbleby has presided over a recording of one of BBC Radio 4â€™s most high-profile programmes at the Universityâ€™s Penrhyn Road campus. Any Questions?, the longest-running political discussion show on British airwaves, was beamed live to listeners from the Jacqueline Wilson Hall on 17 August. The recording marked one of the few times the show has been broadcast from the borough in its 60-year history.

As University staff and Kingston residents looked on, Dimbleby and a four-strong panel, made up of former Chief Inspector of Prisons Lord Ramsbotham, RSA chief executive Matthew Taylor, writer and broadcaster Bonnie Greer and ConservativeHome.com editor Tim Montgomerie, wrestled with a series of questions submitted by the audience on the day. Producer Elaine Lester said the University had proven an ideal venue for the recording. â€œMembers of the audience certainly lived up to our expectations – identifying some particularly topical points for the panellists to debate,â€ she said. â€œBeing invited to Kingston University meant we were able to focus on the issues uppermost in the minds of people living in an area which, although very close to London, has its own distinct community.â€

Kingstonâ€™s Head of Development, Dr Helen Trott, said the University had reinforced its commitment to stimulating rigorous debate on ethical, political and social issues by hosting the show. â€œWith almost 1.5 million listeners tuning in to Any Questions? each week, the programme is a real talking point in homes up and down the country providing an excellent channel for us to raise awareness about the University,â€ she said.

To find out more about the Any Questions? event, please click here.