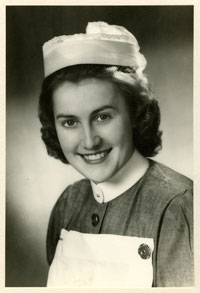 A project giving nurses the opportunity to record their recollections of life on the wards of some of Londonâ€™s leading hospitals has been expanded after attracting further funding.Â  The Nursesâ€™ Voices Oral History Study, being completed by researchers from Kingston University and St Georgeâ€™s, University of London, has been awarded an additional Â£40,000 from the Florence Nightingale Museum. The windfall has enabled the project to branch out to incorporate interviews with current and former nursing staff from Guyâ€™s and St Thomasâ€™s Hospitals.

Deputy Dean of the Faculty of Health and Social Care Sciences Kath Start, who heads the research programme, said the grant would lead to the establishment of a more extensive archive of medical memoirs than originally anticipated. The extra funding had also provided the resources to carry out interviews with past and present patients.

More than 150 nurses and midwives with careers spanning as far back as the early 1930s have already shared reminiscences about their time on the staff at St Georgeâ€™s Hospital in Tooting during the first phase of the study, which got under way almost three years ago. â€œWe have collected more than 1,000 hours of recordings along the way, not only reflecting personal experiences but also touching on such topics as how it felt to work in the sector when the National Health Service was first introduced,â€ Mrs Start said.

Former nurse Averil Wingent got so much out of recounting tales from her days working at St Georgeâ€™s that she signed up to interview nurses from Guyâ€™s and St Thomasâ€™s for the next stage of the study. The 72-year-old grandmother, who was based at St Georgeâ€™s from 1952 to 1957, still vividly remembers the impact of rationing on hospital meals and the atmosphere when she was travelling to work on the day of the Queenâ€™s coronation. â€œAmong the most striking things I have noticed in my interviews with nurses from the 1940s, 1950s, 1960s and 1970s are the moves away from formal uniforms and having the matron as the ward figurehead,â€ she said. Despite those changes, nurses down the generations appear to have a lot in common. â€œAll the people I have spoken to have emphasised how the profession has touched on every aspect of their lives,â€ Mrs Wingent said. â€œWe all seem to possess an inbuilt sense of compassion and take real pride in the fact that we chose to serve as nurses.â€