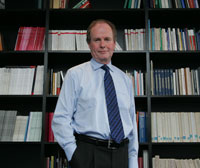 Kingston Universityâ€™s Vice-Chancellor Professor Peter Scott has been knighted for his services to higher education. A leading figure in the sector after a career spanning three decades, Professor Scott was selected for the award in recognition of his longstanding contribution both in the national arena and working for individual institutions. The honour is due to be bestowed at a special investiture ceremony at Buckingham Palace later this year.

Since joining Kingston University as Vice-Chancellor in January 1998, Professor Scott has worked tirelessly to open up access to university education. He is currently chairman of the Universities Association for Lifelong Learning and President of the Brussels-based Academic Cooperation Association and the German Academic Exchange Service (DAAD) at European level. Professor ScottÂ said he wasÂ extremely flattered to have been awarded a knighthood. â€œI regardÂ this great honour as a tribute to Kingston University's success,â€ he added.

Educated at Oxford University, Professor Scott was editor of The Times Higher Education Supplement for 16 years before joining the staff at Leeds University in 1992. While at Leeds, he served as Director of the Centre for Policy Studies in Education and as Professor of Education before being promoted to the post of Pro-Vice Chancellor for External Affairs. Professor Scott was a member of the board of the Higher Education Funding Council for England from 2000 until 2006 and chaired its Quality Assurance Learning and Teaching strategic committee. His research interests include the governance and management of universities and colleges, expanding access to higher education and the links between further and higher education.

Deputy Vice-Chancellor Professor Mary Stuart said the knighthood was a fitting tribute to Professor Scottâ€™s distinguished career in higher education and the vision and leadership he had displayed during his nine years as Vice-Chancellor at Kingston. â€œPeterâ€™s insights into the changing nature of higher education and indeed knowledge creation have been a vital contribution to the sector and these achievements are symbolised by this honour,â€ Professor Stuart said. â€œI am sure under his leadership the University will continue to go from strength to strength.â€

Professor Scott holds Honorary Doctorates from the University of Bath, the University of Manchesterâ€™s Institute of Science and Technology, the former Council for National Academic Awards, Anglia Polytechnic University and Grand Valley State University. He is also a Member of the Academia Europaea and belongs to the Academy of Learned Societies for the Social Sciences.