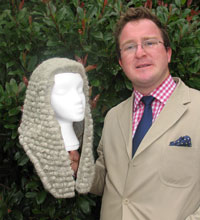 Discovering a set of stocks in a lecturer's office might cause some scholars to run for the door. But students at Kingston University in South West London need not worry. The replica device is just one of the items on show at the Muir Hunter Museum of Bankruptcy which is housed at the University's School of Law. The mini museum, established by senior lecturer John Tribe, boasts more than 150 artefacts connected to the treatment of debtors over the ages and has become something of a talking point among students, staff and visitors.

Based in the Centre for Insolvency Law and Policy, the collection started out as a hobby for Mr Tribe, who has established himself as one of the foremost experts in insolvency in the United Kingdom.  "I found some articles connected to bankruptcy on eBay when I was completing my doctoral research," he said. "I secured some 19th Century bankruptcy residency revenue stamps and put them on show in my office and the display really spiralled from there." The collection now includes a set of law reports dating back to 1895 from insolvency expert Sidney Pearlman's library, as well as memorabilia from Railtrack and Enron, from before the companies were wound up.

After seeing how much interest the collection had sparked, Mr Tribe went a step further and even had some pillories purpose built to allow students to glimpse the punishments inflicted on debtors in years gone by. "In the past debtors endured all sorts of punishments," he said. "The students were fascinated to read old case notes and learn about the fates that befell debtors, which ranged from being locked up in prison to being beaten to death while held captive in the pillories – which were a bit like stocks."

Word of the usual assortment of exhibits has even spread to the Royal Courts of Justice, prompting Chief Registrar Stephen Baister, the country's leading bankruptcy judge, to donate on long term long a 19th Century ceremonial wig and an official seal dating back to William IV. Mr Tribe said it was a great honour to see the museum recognised by such an important figure in the world of insolvency and the loans would bolster the museum's collection immeasurably. "The ceremonial wig would have been worn by the top bankruptcy judges in the late 1800s and early 1900s on visits to the House of Lords to mark the opening of court," he said. "The seal was used from 1830s to mark all official bankruptcy-related paperwork. Both pieces have enormous significance in the history of insolvency and law."

The museum has been named after retired barrister Muir Hunter QC who specialised in insolvency law and still serves as an honorary professor at Kingston University. He said he was intrigued to see all the artefacts that had been secured so far. "Many of exhibits brought back memories from my own career, such the library belonging to Sidney Pearlman who worked with me on a number of cases," he said. Mr Hunter has also signed a copy of the 1982 Cork Report produced after he and a group of experts met to advise the Government on proposed changes to bankruptcy legislation. "What started out as a small research interest has become an important archive documenting the history of bankruptcy, establishing it as a valuable asset for students and scholars," he added. "Kingston is the only university in the country to currently house a collection of this nature or indeed to currently have a Centre for Insolvency Law and Policy singling it out as an important seat of research. Hopefully even more artefacts which have an important place in insolvency history will come to light."