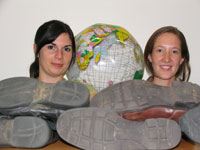 Kingston University is stepping up efforts to reduce its carbon footprint after pledging its support to a nationwide environmental initiative. The University has signed up to the Higher Education Carbon Management Programme, a scheme run by the Carbon Trust to assist institutions eager to cut carbon emissions and boost energy efficiency. Kingston is one of 15 universities across England and Scotland joining the third phase of the scheme.

As part of the programme, the University is monitoring energy consumption in its buildings and transport system more closely. Regular workshops will also be run for staff and senior managers to emphasise the importance of sustainability in all activity across Kingstonâ€™s four campuses. Representatives from the Carbon Trust have already visited the University to carry out an energy audit to help pinpoint areas working well and suggest measures which could be implemented to make further long-term improvements.

The Universityâ€™s sustainability facilitator Nicola Corrigan said finding ways to save energy more effectively was becoming an increasingly important issue for both students and staff. â€œI know that minimising the Universityâ€™s carbon footprint is something they genuinely care about, so I am confident they will all pull together as more positive changes are introduced,â€ Ms Corrigan said.

Activity in the pipeline includes an awareness raising campaign reminding students that such simple actions as turning the lights off when they leave a room can make all the difference when it comes to energy efficiency. The sustainability team is also encouraging staff to do their bit by taking part in the Turn It Off campaign, ensuring all unnecessary electrical equipment is shut down when they leave the office each evening. Staff are also being urged to volunteer to become carbon champions, responsible for encouraging their immediate colleagues to embrace energy efficient initiatives.

University Secretary Donald Beaton said Kingstonâ€™s involvement in the Higher Education Carbon Management Programme signalled its strong commitment to addressing its impact on climate change. â€œThe University has already invested heavily in energy-saving technology and in ensuring its new buildings are energy efficient as well as minimising its effect on the roads by running a bus service and promoting car sharing,â€ Mr Beaton said.

Richard Rugg, Head of Public Sector at the Carbon Trust, welcomed Kingstonâ€™s involvement in the initiative which he said was all the more important given the fact that, in England alone, the higher education sector emitted 3.3 million tonnes of carbon dioxide a year. â€œCutting carbon emissions should be a key priority for all universities and higher education colleges. With the sector currently spending more than Â£200 million on energy each year, improving energy management and reducing bills as part of the process is crucial. The low carbon option is often the low cost option in the long run – weâ€™re hugely excited to be working with Kingston University to help them develop an effective carbon management strategy that will tackle climate change head on.â€