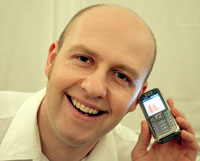 Smokers struggling to give up the habit as the Governmentâ€™s ban on smoking in public places looms now have a new high-tech support system at their fingertips. Quitmate, a computerised program that allows users to track exactly how many cigarettes they have each day and sets targets to help them reduce that amount, has just been released on to the market. Devised by businessman Andy Griffin, a member of Kingston Universityâ€™s Round Table of Inventors, the technology has already sparked widespread interest, even earning its designer a gold medal in the consumer category at last yearâ€™s British Invention Show.

The enterprising sales manager came up with the software in an attempt to help wife-to-be Helena Raccah give up cigarettes. It allows smokers to enter information about the frequency of their habit straight on to their mobile phones. The details are then transformed into easy-to-read graphs to help them monitor their cigarette consumption and spot possible patterns in their behaviour. The system also sets goals for gradually cutting back and, as an added incentive, tallies up how much money smokers could save in the process. â€œThe beauty of the software is that it makes people really stop and think about what triggers them to reach for that next cigarette and helps them identify when they may be particularly susceptible to the urge to light up,â€ Mr Griffin said.

Guided by staff from Kingston Universityâ€™s Enterprise Exchange and fellow members of the Round Table for Inventors, Mr Griffin originally toyed with the idea of manufacturing the design as a handheld device but eventually opted to launch the first phase of the service as a download to mobile phones known as QuitmateME. â€œThat way I will be able to gather customer feedback, refine the software if necessary and acquire the capital to manufacture a version for people who donâ€™t want it linked to their phones,â€ he explained.

The system has already produced its first success stories. Julia Robinson, who used to smoke up to 15 cigarettes a day, managed to give up altogether after volunteering to take part in initial trials. â€œI was shocked to see the charts and realise how much I smoked, particularly on Friday and Saturday nights,â€ Miss Robinson said. â€œThe information really motivated me to cut down and, after two months, Iâ€™d stopped completely. Iâ€™m quite competitive so having targets to beat definitely helped.â€

Kingston Universityâ€™s Director of Enterprise Marguerite Lipscomb said the launch of the product demonstrated the Universityâ€™s success in helping inventors transform their initial ideas into marketable products. â€œWe attach great importance to sharing the Universityâ€™s expertise, not only with students, but also with businesspeople in the wider community so they can come up with innovative solutions to age-old problems,â€ Mrs Lipscomb said. â€œBy offering specialist advice and helping them to source funding, input from Kingston Universityâ€™s Enterprise Exchange team is able to make a tangible difference as they strive to achieve their goals.â€

Smokers keen to put the QuitmateME system to the test should visit www.quitmate.co.uk.