Most visitors leave Kew Gardens with memories of the amazing plants and their scents, but Kingston University student Alastair Muir left having made an exciting discovery which will have important implications for scientists. The biology graduate, who spent a 12 month workplace placement at the world famous botanical gardens during the third year of his degree, uncovered a new â€˜jumping geneâ€™ - in a plant belonging to the lily family. The findings could help solve questions which have long puzzled scientists such as why some plant species have considerably more DNA than humans. 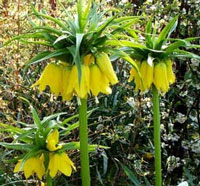 Mr Muir made the discovery after winning one of Kewâ€™s sought after student placements. He was asked by the experts at Kew to investigate an unusual pattern of DNA fragments which had already been detected by another researcher in the Crown Imperial Fritillary. Checks suggested that part of this DNA pattern was a fragment of a jumping gene - known in scientific circles as a retrotransposon. Mr Muir was charged with taking the small fragment and working out the full code for the jumping gene using a scientific technique known as genome walking. â€œThis technique increases the length of the sequence of the jumping gene,â€ he explained. â€œI used test-tubes containing Crown Fritillary DNA, specially designed molecules and enzymes which were warmed in a heating block.â€ Working with the team at Kewâ€™s Jodrell Laboratory, Mr Muir then transferred the DNA sequence on to a computer and after plenty of perseverance, repeating the method several times, gradually unravelled almost all of the genetic code.

â€œI became more and more intrigued as I went along,â€ the 27-year-old Kingston University graduate, who is originally from Ballymena, in Northern Ireland, said. â€œIt was challenging because I was learning new techniques and using equipment I hadnâ€™t used before, but also very rewarding when I finally ironed out the code. It took many hours work, but it was worth it to be the first person to finally see the full code. Jumping genes are quite well known and present in all life forms, but as yet not much work has been done on their presence with large amounts of DNA.â€

Being the first to discover the jumping gene, Mr Muir also got to name it and chose FiRE (Fritillaria imperialis RetroElement) – taking the Crown Imperialâ€™s Latin name. â€œThe information I have uncovered will help scientists to keep chipping away at a puzzle which has been fascinating experts for years,â€ he added. â€œSince the 1950s experts have been interested about why different organisms have different amounts of DNA. My research will not answer this question overnight, but it is another segment of analysis that will help solve the puzzle.â€ Mr Muir is currently writing up his findings, and since graduating from Kingston University is also continuing his studies, taking a PhD in Genetics at the University of Bath.

Scientists at Kew now plan to build on Mr Muirâ€™s research and complete further studies to explore the distribution of jumping genes in plants and their role in evolution. Kewâ€™s Head of Genetics, Dr Mike Fay, believes offering placements in industry has benefits for businesses and allows students to learn new skills. â€œAlastairâ€™s breakthrough shows students on work research placements can achieve marvellous things,â€ he said. â€œWorking at Kew is a great way to kick-start their careers and gives students the opportunity to investigate a whole range of research interests which affect plant life around the globe. Sometimes, like Alastair, they are even lucky enough to discover something that will have a lasting impact on the wider research we do.â€