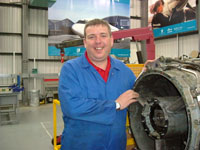 Andrew Davison has not looked back since he swapped life on the high seas to take on a land-based posting completing Kingston Universityâ€™s Foundation Degree in Aircraft Engineering. The former Navy officer, who is sailing through his course at the Newcastle Aviation Academy, has become such a high-flying student that he has even seen off competition from across the United Kingdom to scoop a top industry accolade.

Mr Davison has received a Â£2,500 scholarship from the International Society of Transport Aircraft Traders (ISTAT), the worldwide foundation responsible for raising the profile of the aviation industry and supporting new talent through funding and training programmes. Nominated by his tutors after impressing them with his work ethic, he was one of just 16 students from around the globe chosen to carry off the coveted awards this year.

Mr Davison rubbed shoulders with some of the biggest names in the industry when he travelled to the United States in March to collect the grant at a ceremony in Phoenix. The honour has topped off a life-changing year for the trainee aircraft engineer, who has quickly adapted to the challenges of going back to the books and is determined to make the most of the state-of-the-art facilities, including a fully-functional Boeing 737, on offer at the Academyâ€™s Newcastle Airport base. â€œIt was a big wrench leaving the Navy, but I knew I needed to embark on an alternative career path if I was going to be able to spend more time with my daughters, Samantha and Charlotte, as they grew up,â€ he admitted. â€œNow Iâ€™m confident that Iâ€™ve made the right choice. The course has given me a fresh sense of purpose and the scholarship has really helped out covering fees and equipment costs.â€

Head of the Newcastle Aviation Academy Jeff Watson said Mr Davisonâ€™s motivation and enthusiasm for learning had established him as an outstanding role model for his fellow course mates. â€œWe take great pride in our ability to train students to the extremely high standards exemplified by Andrewâ€™s internationally-acclaimed success,â€ Mr Watson added.

The Aviation Academy opened in 2003 after Kingston University joined forces with Newcastle Airport, Newcastle College and the City of Bristol College to find a way to tackle a nationwide shortage of skilled aircraft maintenance engineers.