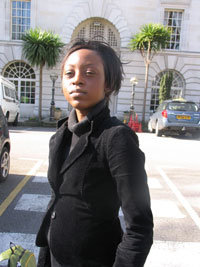 A Kingston University architecture student has received a boost to her studies thanks to a bursary from The Stephen Lawrence Charitable Trust. Susan Abaniwo, 24, from Forest Gate, East London, was among seven students nationwide to receive grants from the charity during the 2006-07 academic year. The money is awarded to help students whose families have not traditionally sent children to university cover tuition fees, maintenance costs and field trips.

Miss Abaniwo, a third year architecture student, said the Â£2,000 bursary from the trust had allowed her to cut down on the hours she worked at an out-of-hours GP service to concentrate more on her studies. It had also helped with the costs of buying course materials. â€œIâ€™ve always dreamt of being an architect and knew that was what I wanted to study,â€ Miss Abaniwo said. â€œBefore I got the bursary, I used to work every weekend just so I had enough money to travel to and from my university lectures. I couldnâ€™t afford books and was always worrying whether I had enough money to buy paper and materials.â€

Winning the bursary has not only allowed Miss Abaniwo to buy more materials – she also plans to go on a study trip to San Francisco in March, something she wouldnâ€™t have been able to afford to do before. â€œThe bursary has made my life a lot easier and Iâ€™m very grateful to the trust for its support,â€ she said. â€œIt means I can stop worrying about the expense and concentrate on doing well in my coursework instead. The fact that I was chosen out of so many people has given me more confidence too.â€

A-level student Stephen Lawrence was 18 years old when he was fatally stabbed at a bus stop near his home in Eltham, South East London, in April 1993. He had always dreamed of becoming an architect so that he could influence the design of inner cities â€˜from withinâ€™.Â  Derek Bardowell, mentoring scheme manager at the trust, which was set up in Stephenâ€™s memory, said one of its goals was to make Stephenâ€™s dreams a reality for others by opening up opportunities for some ofÂ  Britainâ€™s most disadvantaged young people to become architects or work in related professions. Established in 1998, the trust has so far awarded more than 50 undergraduate and postgraduate bursaries to students. â€œIt is extremely important to us to invest in the education of children and young people whose aspirations and life chances are constrained by economic, cultural and social hardship,â€ Mr Bardowell said.

Another Kingston student, Muriel Tsikirayi, 19, who is in her second year of a BA in Architecture, also received a bursary from the trust this year.

Professor Sarah Chaplin, Head of the Universityâ€™s School of Architecture and Landscape, said it was a tremendous honour for Kingston to have two of its students selected to receive bursaries. â€œThe awards will make a big difference to their ability to get the most out of their studies and go on to launch successful careers,â€ Professor Chaplin said.