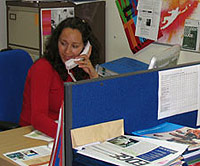 Women spend more time feeling tense and worried at work than their male colleagues, a new in-depth study into workplace relations shows. The research by experts from Kingston Universityâ€™s School of Human Resource Management found women were less likely than men to be relaxed and calm in the workplace, but still tended to be more satisfied with their job.

The research, Working Life: Employee Attitudes and Engagement, commissioned by the Chartered Institute of Personnel Development, sampled 2,000 workers from the public and private sector. Dr Emma Soane, who worked with Ipsos MORI to conduct the research, said the findings suggested women were more emotionally-attached to their jobs. â€œThis greater level of involvement would explain why some women experience anxiety at work, but also feel positive about their role,â€ Dr Soane said. â€œWomen are more likely than men to be caring for children or other family members, and the pressure of juggling multiple roles could be the reason why they worry more in the workplace.â€

One possible explanation for the anxiety women reported could be down to the fact that 29 per cent of those surveyed said they had encountered some form of bullying or harassment at work, Dr Soane said. Men on the other hand had experienced less bullying with just 19 per cent saying it was a problem. Despite women feeling less relaxed in the office, overall the study showed there were no significant differences between men and womenâ€™s experiences of stress at work. The study also showed women tended to fare better in their appraisals and were more passionate about their work. They also felt more positive about their senior management team than men, with 41 per cent of women questioned saying they had confidence in their senior managers, compared to 34 per cent of men.

Female workers also reported a number of other positive aspects about their jobs. Women worked shorter hours, with 44 per cent of women contracted to work fewer than 35 hours per week compared with 18 per cent of men. Female workers were also happier with their work-life balance and felt they got more support to work flexible hours than their male counterparts. A total of 58 per cent of women surveyed said they were happy with their work-life balance, compared to 52 per cent of men.Â  â€œThis is probably a reflection of the fact that employers have made some changes to make it easier for women to work shorter or more flexible hours, but this has not yet filtered through to men,â€ Dr Soane said. â€œThere is a perception that people who work part-time are not as committed to their work, but our research completely contradicted this, showing that part-timers usually worked tirelessly to ensure their work was done. It seems if the employers can offer some flexibility in terms of working hours, they are likely to be rewarded by committed and high-performing employees.â€

The Working Life: Employee Attitudes and Engagement survey was commissioned by the Chartered Institute of Personnel Development.

The research was carried out by Professor Katie Truss, Dr Emma Soane and Professor Christine Edwards from Kingston Business School and Ipsos MORI.