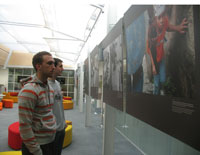 Slavery, genocide and the arms trade are among the thought-provoking topics to being placed under the spotlight at Kingston Universityâ€™s inaugural Human Rights Festival which begins this month. Designed to raise awareness and stimulate debate amongst students, academic experts and the general public, the festival features a two-month programme of lectures, debates, short films and exhibitions organised by the Faculty of Arts and Social Sciences.Â

Highlights include a lecture by foreign correspondent Robert Fisk, who has spent more than three decades reporting from the frontline in trouble spots across the Middle East. Other speakers sharing their insights into the impact of conflict and political repression include James Savage, Amnesty International UKâ€™s individuals at risk programme manager, Kevin Studds from the international law department at the British Red Cross and Teresa Pérez from the Colombia Solidarity Campaign. Their messages are reinforced by the photographic exhibition Caught in the Crossfire, which is being staged in conjunction with Oxfam and Amnesty International and depicts the devastation caused by the arms trade.

Associate Dean of the Faculty of Arts and Social Sciences Philip Spencer said organisers were keen to see the festival become an annual fixture on the University calendar. â€œRound-the-clock news coverage has positioned humanitarian crises, international conflict and violations of individual rights more prominently in the public consciousness than ever before,â€ he said. â€œThe festival events enable us to share the Universityâ€™s research expertise with the wider community by enhancing understanding not only of why and how crimes against humanity are perpetrated but also of the action being taken to redress the oppression still occurring at alarming levels around the world.â€