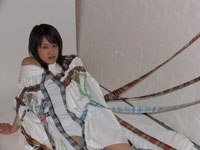 Students from Nagoya University of Arts and Sciences in Japan have tapped into the latest trends on the London fashion scene during a fact-finding visit to Kingston Universityâ€™s School of Design. As part of a fashion-intensive fortnight, the 21-member tour party worked with top stylists and photographers and spent time at leading designer Vivienne Westwoodâ€™s company headquarters.

Lecturer Joe Bates said the exchange marked the start of a new link between the two institutions. â€œOur goal was to give the students a real flavour of what life is like in the United Kingdom by arranging for them to be hosted by families living in the area and taking them on excursions across the capital,â€ he said. â€œWe hope this will be the start of a mutually-beneficial partnership through which students from Kingston and Nagoya Universities can share and develop their knowledge.â€Â

As well as absorbing the sights and sounds of the capital and the educational atmosphere at the Universityâ€™s Fashion Department, the students had the opportunity to bring their creative flair to the fore. Inspired by University-organised visits to famous shopping haunts such as Camden Market and Oxford Street, they rose to the challenge of adding their own individual touches to white Brooks Brothersâ€™ shirts to produce original outfits. Stylist Adam Howe, who has worked with i-D Magazine, Italian Vogue and The Face, assisted the young designers with last-minute preparations before they showcased their work at a photo shoot.

Miho Amano, who completed a garment with swirling tartan trails during the final exercise, said she had noticed subtle differences in the way fashion was taught in the two countries. â€œIâ€™ve discovered new techniques and now feel full of fresh ideas,â€ the 20 year old said. Fellow exchangee Hiroshi Yamashita said he had relished the opportunity to immerse himself in another culture. â€œPeople in London have a unique sense of style which really sets the city apart,â€ he said. â€œIâ€™ve learned how to create more volume with fabric and now even have the ability to achieve the perfect look for a fashion photograph all thanks to my trip to the United Kingdom.â€