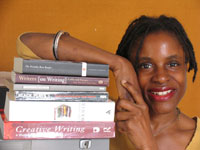 A Kingston academic who is also one of the United Kingdomâ€™s leading female playwrights has had her latest work aired on BBCâ€™s Radio 4. Station executives commissioned Winsome Pinnock, a senior lecturer at the Faculty of Arts and Social Sciences, to produce the drama to mark the 200th anniversary of the end of the slave trade in Britain.

The Dinner Party, starring June Whitfield and Don Gilet, focuses on the fictional King clan and the events that unfold when they sit down to celebrate New Yearâ€™s Eve in 2006. â€œThe plot centres around the family who have transformed their house into what they have named the Peter King House of Exploration and Discovery – a museum honouring their ancestorâ€™s contribution to scientific development,â€ Ms Pinnock said. â€œJust as the champagne is about to flow, a stranger turns up claiming to be a direct descendant of the explorer. He forces the family to confront the fact that much of Kingâ€™s wealth was amassed through the slave trade, provoking arguments about slavery and reparation as well as bringing feelings of shame and guilt to the fore.â€

The hour-long drama was broadcast in March as part of a series of programmes commemorating the bicentenary of the 1807 abolition of the Slave Trade Act, which aimed to bring the transatlantic transportation of millions of Africans to a halt.

Writing the play proved an emotional experience for Ms Pinnock. â€œItâ€™s a topic Iâ€™ve never tackled before and was a difficult subject to approach, particularly when some of my own ancestors were slaves,â€ she said. â€œItâ€™s a very sensitive issue to face up to and itâ€™s easy to see the connections it has to the racism and inequality that still exist to this day.â€ Ms Pinnock intends to explore these issues in more depth by developing her BBC script into a longer stage version of the play.