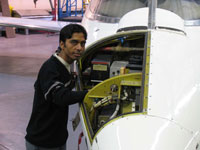 Anjay Kumar can still remember the ripple of excitement that used to spread around his remote village in northern India whenever an aeroplane flew overhead. Leading a charge of dozens of children, he would dash out of his home and gaze skywards in awe. Little did he imagine that, just a few years later, he would be coming face to face with aircraft every day – as part of aerospace engineering studies at Kingston University.

The 20 year old is fulfilling his childhood dream after becoming one of the first students from his village to go to university in the United Kingdom. Sponsorship from the education charity Pestalozzi International Village Trust, which helped him complete an International Baccalaureate at Hastings College of Arts and Technology, paved the way for his venture into higher education. After honing his English and design skills, the aspiring aerospace engineer was determined to take his studies further and headed for Kingston to embark on a degree.

The first few days at the Universityâ€™s Roehampton Vale campus are still etched firmly in Anjayâ€™s mind. Not only did he find himself surrounded by hundreds of fellow students with a shared passion for engineering, he had access to equipment he would never have dared contemplate one day working with. â€œThe facilities I am able to train on are, quite simply, astounding,â€ Anjay said. â€œI still canâ€™t quite believe that the University has equipment like a Learjet and part of a Boeing 737 fuselage installed for us to use to improve our aircraft maintenance skills.â€

With a new circle of friends eager to help him adapt to British life, Anjay has had no time for even fleeting feelings of homesickness.Â  â€œMy flatmates are always really interested in talking to me about their lives and finding out all about mine in India. I really enjoy being at a major University on the outskirts of London as well, getting the opportunity to meet people from so many different walks of life and learn about so many cultures,â€ he said.

Back in his home state of Bihar where families make barely enough to survive, Anjayâ€™s father, who had to leave school when he was just 11, takes great pride in his sonâ€™s academic achievements. â€œOnly a handful of people from my village have ever had the chance to get a degree,â€ Anjay explained. â€œWhen I go home, there is a real buzz of excitement and everyone clusters around asking about life in England.â€

Once he has gained his engineering qualifications, Anjay has pledged to invest some of his earnings in helping other villagers go to university. â€œMy time at Kingston University has made a big difference to my education and has changed my outlook on life,â€ he said. â€œI canâ€™t think of anything more rewarding than one day being in a position to give something back to other potential students as I move on with my career.â€

Kingstonâ€™s Head of International Development, Dr Heather Forland, said India was a growing market for the University. â€œAnjay is a striking example not only of the personal benefits that international students can gain from going to university in the United Kingdom, but also of the impact they can go on to have inÂ  their home countries. His plans to sponsor other international students could make a real difference to their lives and ensure they have a prosperous future,â€ she said.