Trendsetter does the locomotion

Trendsetter does the locomotion 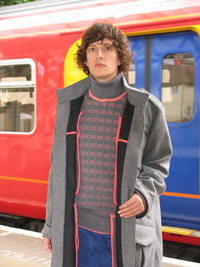 They are usually found clutching their clipboards on railway station platforms. Now trainspottersâ€™ unique sense of style is being brought out of the shadows and put under the spotlight by a Kingston University fashion student. The railway enthusiastsâ€™ favourite attire – the parker, the woolly jumper and the anorak - have been used as the basis for final-year fashion student Katy Rutherfordâ€™s new clothing range.

Trips to Londonâ€™s Clapham Junction Station and to Grand Central Station in New York sparked the idea for Katyâ€™s final collection. â€œI was keen to focus on outerwear and to start from a slightly quirky angle, so I met up with model train fanatics and began to look at the clothing usually worn by trainspotters,â€ the 22 year old said. â€œI spent last summer in New York where I used to travel on the subways a lot. While I was over there I built up a collection of railway magazines and even discovered some diaries kept by train enthusiasts when I was at a vintage fair.â€

Garments in the range play on the trainspottersâ€™ stereotypical awkward image. Jumpers include patterned, polo-necks and one has even been embellished with small train motifs bearing numbers found logged in the diaries Katy uncovered during her research. Waterproof duffle coats, parkers and fleeces are other prominent features in the range many incorporating as many pockets as possible to hold notepads and accessories. â€œThereâ€™s a big emphasis on colour,â€ Katy said. â€œIâ€™ve developed patterns based on the seat covers on the tubes as an inspiration for some of the designs.â€

Katy, who comes from Northumberland, has yet to find out how her designs will be received by the trainspotting fraternity. â€œI hope Iâ€™ve managed to capture some of their characteristics and enthusiasm for their hobby,â€ she said.

Katyâ€™s talent has already caught the eye of American tailored clothing label Brooks Brothers. She was one of three winning Kingston students in a competition organised by the company and scooped a two-month summer placement in New York where she worked as a designer on menswear, womenswear and accessories.

Senior fashion lecturer Mo Ali predicted that the blend of practical elements that Katy had used would make her garments readily adaptable for the retail market. â€œAt Kingston University we encourage our students to look far and wide for inspiration and translate this into concepts that will attract shoppers,â€ he said. â€œThereâ€™s enormous demand for jackets and coats and Katyâ€™s clothing has a wearability factor which should have widespread appeal.â€