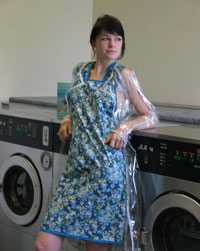 Who would have thought it - EastEnderâ€™s Dot Cotton could be about to become a style icon. A final-year fashion student at Kingston University has used the BBC soap favourite as the inspiration for her final-year collection. Hollie Luxton, an avid EastEnders fan, has centred her designs around the paraphernalia found in laundrettes and the effect the machines have on washing.

The starting point for Hollieâ€™s collection came from some old photographs of coats worn by her grandmother in the 1970s. â€œThe photographs reminded me of Dot Cotton from EastEnders and demonstrated the type of clothing laundrette staff and their customers wore,â€ she said. â€œI wanted to capture the nostalgia from those bygone days and play with the idea of clothing coming out of the wash misshapen and faded.

Essex-born Hollie researched her collection by visiting laundrettes in Kingston and Surbiton, interviewing customers and looking at how dress sense had changed since the 1970s. As the machines whirred in the background, she met a number of old ladies who shared their memories about styles of yesteryear. â€œThey were a great source of inspiration,â€ Hollie said. â€œMy clothes are intended to be worn by 20-somethings, but Iâ€™m using fabrics that hark back to an earlier era.â€

The collection features knitwear, floral prints, skirts, jackets and dresses.Â  Many items have short-sleeves to give the impression that they have shrunk in a tumble dryer, while other garments have been deliberately pulled into twists as if they have been caught in the spin cycle. The effect is enhanced by plenty of pastel colours that create a washed-out look.

Senior fashion lecturer Mo Ali said Hollieâ€™s work incorporated a range of complex techniques. â€œThe fusion effect she has created with a range of fabrics gives the clothing a fresh look,â€ he said.