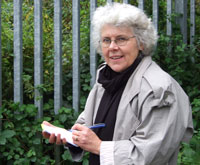 A team from Kingston University in South West London has won a sought-after contract to examine the process through which the Government collects, holds and provides access to information about brownfield sites across England.

The Kingston experts have embarked on a nine-month project to review the National Land Use Database of Previously Developed Land (NLUD-PDL), which provides an inventory of vacant and derelict land and buildings in England and information about occupied land and buildings with redevelopment potential.

The Head of Kingston Universityâ€™s School of Surveying, Professor Sarah Sayce, said the database was essential to the National Brownfield Strategy for England.
â€œThe project forms a key part of the Governmentâ€™s policy to make sure land across the country is put to best use,â€ Professor Sayce said. â€œBy building up a definitive database of land uses, we will be helping the Government to manage its most precious resource effectively.â€

The database was launched in 1998 and has been refreshed annually since 2001 with data supplied by local authorities. English Partnerships National Brownfield Advisor Professor Paul Syms said reviewing the way data was collected was essential to ensure information on the extent and location of brownfield land was as reliable as possible.
â€œThis work will help the Government meet its targets for bringing brownfield land back into productive use,â€ he said.

English Partnerships and the Department of Communities and Local Government are funding the project, due to be completed by mid-2008.

Professor Sayce and the multi-disciplinary Kingston University team – including Research Leader for the Centre for Geographical Information Systems Professor Nigel Walford, Director of the Centre for Economic Research and Intelligence Dr Peter Garside, Senior Lecturer in Computing, Information Systems and Mathematics David Livingstone and project researcher Tony Vickers – have launched a comprehensive online survey of local authorities, which they are urging planning officials to complete as soon as possible.

A comparative analysis of approaches to collecting, storing and providing access to brownfield and land use data in other European countries will add an international dimension to the review.