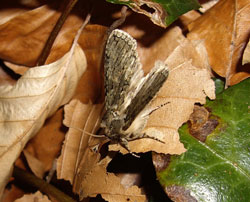 Staff at Kingston University in South West London pulled on their Wellingtons and reached for their torches this week to delve into the mysterious night time world of moths. The hardy environmentalists, led by the Universityâ€™s biodiversity officer Martin Mullett, set out on their moth-spotting expedition as part of a project to log the different species that have made their home in woodland at the Universityâ€™s Kingston Hill campus.

The exercise took place under the watchful eye of moth expert Paul Wheeler from environmental charity Butterfly Conservation. He helped the group set up three special lamps around the site to attract the moths, which were then examined in greater detail before being allowed to fly free. The number of moths in Britain had dropped by as much as a third in the past 40 years, Mr Wheeler said. â€œThis is largely the result of extensive development that threatens wildlife, with some varieties like the Bordered Gothic now thought to be extinct in the United Kingdom,â€ he explained.

Although the teamâ€™s hopes of catching a glimpse of some of Britainâ€™s rarer moths were dashed, they still encountered plenty of insects of interest during their mission including the Brindled Pug and the Frosted Green. â€œThe Universityâ€™s moth hunt was a novel way to raise awareness about key environmental issues affecting natural habitats and the smaller insects which depend on such settings, particularly in sprawling cities, to survive,â€ Mr Wheeler said.

The moth expedition forms part of a six-month project to map flora and fauna across the University. â€œWe want to get a far clearer idea of the types and numbers of plant, insect, bird and animal species on these sites,â€ Mr Mullet said. â€œGathering this information is a vital first step to creating a biodiversity policy for the University so it can manage its green spaces even more sustainably, safeguarding habitats and improving them wherever possible.â€ 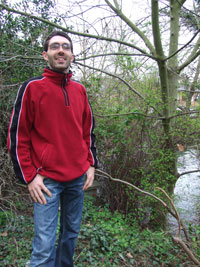 The University is now on the hunt for nature conservationists and ecologists keen to join forces with its own biodiversity and science experts to conduct further species-specific surveys. â€œEach of our sites has its own unique features,â€ Mr Mullett, a Kingston biology graduate, said. â€œThere are bats living in the grounds at the Seething Wells Halls of Residence while the Tolworth Court sports complex is next to a nature reserve along the Hogsmill. As well as being an important green space in its own right, the Kingston Hill campus is just down the road from Richmond Park, which is a site of European interest for rare beetles.â€

Once the legwork has been completed, Mr Mullett intends to work with the Universityâ€™s Geographical Information Systems specialists to create an interactive map, pinpointing plant and wildlife habitats. â€œThis will allow us to easily identify areas of special interest so we can work together to ensure they are preserved, not only for the benefit of  people currently studying and working at the University but for generations to come,â€ he said.