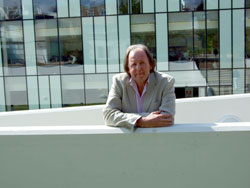 One of Britainâ€™s most eminent social workers has taken up a professorial appointment at a premier provider of health and social care education. Dr Ray Jones is set to spearhead a host of new research projects after joining the staff at the Faculty of Health and Social Care Sciences, run jointly by Kingston University and St Georgeâ€™s, University of London.

In his new role as Professor of Social Work, Dr Jones will take the lead in developing, delivering and disseminating research in social work and social care for children and families and for disabled and older people. Having always harboured a strong professional interest in research, he is looking forward to the challenges in store as he makes the transition from service delivery to academia. â€œThe faculty is already well known as a major player in undergraduate and postgraduate professional education and post-qualifying development programmes as well as having a flourishing research programme,â€ he said. â€œI was intrigued by the unique relationship that exists between Kingston University and St Georgeâ€™s, which have worked together for more than a decade now to deliver one of the largest NHS training contracts in the country, and am eager to play a key role in boosting its research capacity even further.â€

Highly respected in social work circles, Dr Jones has amassed an array of accolades in a career spanning four decades. He has served both as Director of Social Services and, more recently, Director of Adult and Community Services for Wiltshire County Council, steering the authority to a top 3 star rating for its adult service provision in 2005 and a beacon award for its modernisation of learning disability services in 2006. He spent a year at the helm of the newly-formed Social Care Institute for Excellence in 2001 after being selected to become the organisationâ€™s first chief executive. Between 2005 and 2006, his leadership skills were again in demand when he served as deputy chair and then chair of the British Association of Social Workers.

The author of five books on social work and social policy, Dr Jones also has a proliferation of published papers to his name and is a member of the Academy for the Social Sciences. An accomplished media commentator and columnist, he was named one of the top 10 most influential social workers in the United Kingdom by the Independent on Sunday in 2001.