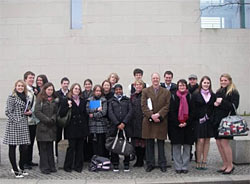 Itâ€™s not every day that a group of students get invited to have a look inside the German equivalent of Whitehall, but for a handful of Kingston University geographers, thatâ€™s exactly what happened. The 18 second-year geography students stepped through the doors of the Kanzleramt for the once-in-a-lifetime guided tour of Germanyâ€™s power house during a field trip to the capital Berlin.

Set up by Dr Anne Clausen, from the Universityâ€™s School of Geography, Geology and the Environment, the students had a discussion with Dr Maximilian Müller-HÃ¤rlin, the personal assistant for the Minister of State for Integration, Professor Maria BÃ¶hmer, during their visit to the Kanzleramt. â€œThe students have been studying geographies of migration and integration, and Berlin is a great case study,â€ Dr Clausen said. â€œNot only does it have one of the highest foreign migrant populations in the country, but it also has the East - West perspective to add to the dynamics. I thought visiting the Kanzleramt would be a fitting finale to the five-day fieldtrip, since the German Governmentâ€™s integration policy team is based there.â€ 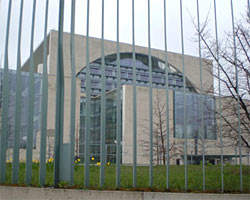 Geography student Tim Durrant found the Kanzleramt visit the highlight of the trip. â€œThe visit provided an unrivalled opportunity to understand the workings of the German Government's integration policy team, which will be invaluable to my studies,â€ the 20-year-old student, who originally hails from Greenwich, London, said.