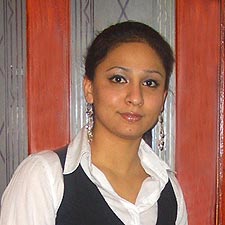 Amrita Dusara, 21, has just returned from a visit to her native Tanzania to see family and friends.Â  The trip also provided an opportunity to climb Mount Kilimanjaro and take in the breathtaking views from its peak. For Amrita, who lives in Edgware, North London, reaching the mountainâ€™s summit mirrored the heights she had scaled during her own academic journey.

Moving from Tanzania to the UK in 2004 to undertake first a BTEC National Diploma in applied science followed by A-levels, Amritaâ€™s eventual goal had always been to get on to a degree course in biomedical science and then to specialise at postgraduate level. She was on a straight path to achieving this when the envelope containing her A-level results popped through the letterbox. â€œI had done well but had just missed out on the grades I needed to go to my first choice university,â€ Amrita explained. â€œI quickly got on the phone to my second choice, pleased that I had at least got the points I needed to take up a place there.â€

Amritaâ€™s confidence quickly turned to frustration, however, after she discovered the course in question was hugely over-subscribed and the University wasnâ€™t accepting any more students on to it. â€œI had spent several, fruitless hours glued to my phone trying to get my place confirmed so I was feeling stressed and disillusioned,â€ she admitted. Knowing that she would have to work very fast if she was to find a place anywhere else, she dug out the number for Kingston Universityâ€™s Clearing hotline in the paper and picked up the phone again.Â  â€œI had to do something.â€ she said. â€œI had good results so I was determined to get into university.â€ Amritaâ€™s persistence was rewarded when she was put straight through to a biomedical science admissions tutor who offered her one of only two places left on the course.

Now, having just completed her first year, Amrita couldnâ€™t be more satisfied with her choice of university and course.Â  â€œI honestly believe it all happened for a reason now,â€ she said. â€œAlthough I did initially find the commute from North London to Kingston a bit of a struggle, the silver lining has been the opportunity the travelling has given me to meet lots of other students from the university.â€

Amrita has thrown herself into life at Kingston, even signing up to be one of the universityâ€™s student ambassadors who provide a studentâ€™s eye view to prospective undergraduates at activities run at the University and within the local community. â€œIâ€™m so pleased I became an ambassador,â€ she said.Â  â€œItâ€™s given me some fantastic experience and I now have a real feel for how the university works.â€

Even before she starts her second year, Amrita is already one step ahead, liaising with university placement officers to investigate options available for her work placement year in 2010.Â  â€œKingston offers options for placements in conjunction with local hospitals and these are often advertised well in advance of the placement,â€ she said.Â  â€œItâ€™s just like looking for any job, the earlier you start looking and the better prepared you are, the more likely you are to get the placement you want.â€

Her advice to other students faced with a results dilemma this year is loud and clear.Â  â€œDonâ€™t give up. Get the paper, look at websites and grab the phone.â€ she said. â€œWith the right attitude, and a bit of perseverance, you too can climb your own pinnacle of success.â€