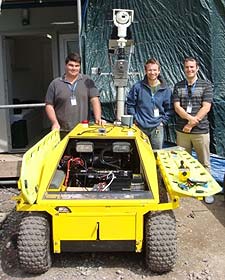 Experts from Kingston Universityâ€™s Digital Imaging Research Centre have played a crucial role in developing technology for a robotic moon buggy able to pinpoint bombs and snipers in the battlefield. Kingston staff and students joined forces with information technology specialists the Silicon Valley Group to create the vehicle, which can recognise obstacles and safely negotiate its way around potentially dangerous terrain.

The University set to work on the project with fellow Silicon Valley Group members IDUS Consultancy, Smith Engineering, the University of Reading and Bruton School for Girls, just over a year ago. Kingston team members Dr James Orwell, Christopher Madden, James Annesley and Jim McLean were drafted in to help devise a specialist system to allow the machine to detect threats soldiers might encounter in a war zone. They installed a Grandeye Halocam camera able to maintain a constant 180-degree view of the vehicleâ€™s surroundings, mounted on a pole so it could pick out potential hazards.

Equipped with its sophisticated image-processing software, the buggy has the ability to perform several tasks, detecting both people and vehicles, estimating whether they are armed and classifying the surrounding landscape so it can navigate a safe course. Dr Orwell said one of the biggest benefits of the system was that it had the capacity to provide soldiers back in a command centre with information about potential marksmen, armed militia and vehicles as well as possible bombs before they launched a military operation. 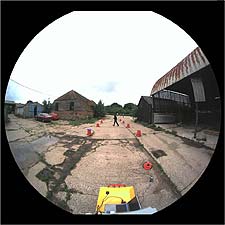 The buggy has already caught the eye of government officials, vying against 10 other machines in the Ministry of Defenceâ€™s Grand Challenge earlier this month. It was one of seven vehicles to battle through to the final stages of the competition, taking part in a mock military scenario at Copehill Down in Wiltshire. During the task, eventually won by the Team Stellar consortiumâ€™s Saturn vehicle, it contended with actors playing the role of enemy troops and props resembling armoured vehicles. Minister for Defence Equipment and Support Baroness Ann Taylor praised the moon buggy and other entries for showcasing a wealth of talent. â€œThe competitors brought fresh, exciting ideas to the defence table which could have battle-winning applications for our Armed Forces,â€ she added.

Dr Orwell said developing the software had been his first foray into the field of unmanned robotic vehicles, taking the type of high-specification technology developed originally for CCTV a stage further. â€œThe competition enabled us to create a robot that could potentially save lives during combat with the capability to scour urban areas and detect possible threats to military personnel,â€ he said. â€œWe are now continuing our experiments and tests with the sensors and cameras to determine where we can make improvements, focusing in particular on detecting and classifying vehicles from several different angles.â€

Kingston Universityâ€™s Digital Imaging Research Centre is held in high repute for its pioneering research in visual surveillance. Its advances in the use of predictive CCTV systems have already been trialled on transport networks both in the United Kingdom and abroad.