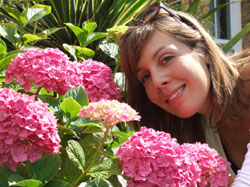 Swedish-born Emma Lennartsson has just come to the end of three happy years at Kingston University, after graduating with a 2:1 degree in Landscape Architecture. Yet just a few months before she embarked on her course in September 2005, Emma was helping to run a fledging gardening business and was up to her eyes in weeding, watering and sweeping up general garden waste.

â€œIâ€™d always had an interest in the outdoors and horticulture,â€ said Emma, 29, who moved to London from HÃ¤rlÃ¶v, SmÃ¥land when she was 19. â€œIt didnâ€™t really occur to me, though, until I took on some gardening work while living in Australia that I could turn my interest into a career by getting a formal qualification and really making a go of it.â€

After leaving school Emma was unsure what she wanted to do with her life. She was keen to learn English so spent a year taking lessons in her homeland and then lived in the United Kingdom for a short spell before turning to sunnier climes spending time in Spain and Australia. â€œI worked mainly in bars and restaurants – which allowed me to be flexible about where I was living,â€ she said.

Emma, who lived in Tooting for her first year and then in Kingston for the last two, has just returned from a last long holiday in Slovakia, and knows she needs to turn her thoughts to finding a job in the profession she loves. She hopes to work for at least a year for a central London landscape architecture firm before returning to study for her Masters.

â€œMy degree focused on the practice and theory of small to large-scale urban and rural landscape design so there are many paths I could now follow. We looked at topics such as the regeneration of large urban derelict open spaces which is something that particularly appeals to me,â€ she said.

Emmaâ€™s advice to students waiting for their A-level results is that they shouldnâ€™t feel pressured into going to university straightaway, or enrolling on courses that might not suit them, just because they believe that is what is expected. â€œIt is better to wait until you are really sure of what you want to do before investing time and money in a degree,â€ she said. â€œAfter all, itâ€™s your life, and itâ€™s never too late to study.â€