Nurse finds her niche through Clearing

Nurse finds her niche through Clearing 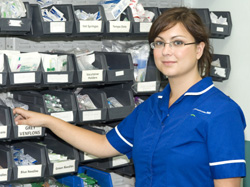 Gemma Allen wakes up every morning not knowing what the day ahead will bring – and thatâ€™s just the way she likes it. The 23-year-old never envisioned she would become an accident and emergency nurse but, following disappointment when her A-level grades were lower than expected, she had to have a re-think.

â€œI had wanted to study medicine initially, but I didnâ€™t get the grades I needed to go to St Georgeâ€™s, University of London,â€ Gemma explained. â€œInstead I applied through Clearing to read biomedical science but early in my first year realised that, though I loved the atmosphere at the University, I wasnâ€™t really enjoying the subject, so I decided to switch again.â€

By then it was May 2004 and Gemma, having missed the normal university application dates, had no alternative but to enter the Clearing system again. When going through the course vacancy lists this time it was the BSc in adult nursing at Kingston University that caught her eye. â€œI knew of Kingston University already, because of the joint Faculty of Health and Social Care Sciences it runs with St Georgeâ€™s, so it didnâ€™t really feel like a total move away,â€ Gemma said. â€œI knew I would be in a familiar environment and that some of my course modules would be taught at the St Georgeâ€™s Tooting site.â€

Gemma spoke to one of the course directors who she recalls was very understanding of her predicament. After a brief initial chat, she was invited in for an interview and was over the moon when she was offered a place to start the following September. â€œFor one of my placements I was sent to St Helier Hospital in Carshalton, Surrey, where I was working in the accident and emergency department,â€ said Gemma, who originally hails from Northampton.

â€œIt hit me almost immediately that this was what I wanted to do. The day goes so quickly and you never know what is going to come through those swing doors. I think itâ€™s the unpredictability that attracts me. You just never know what you are going to be faced with.â€ Gemma, who now shares a flat in Tooting with two nursing friends, has obviously finally found her niche, because, having graduated with a first in August 2007, she applied to Epsom and St. Helier University Hospitals NHS Trust for a full-time post, and was successful.

â€œI feel very lucky to have been appointed to my new post and I think my previous experience in the department stood me in good stead because hospitals are rarely able to take newly-qualified nurses in A and E,â€ said Gemma, who plans to take her nursing experience and use it as a springboard to travel the world in the future. â€œI simply love my job, and with the skills I have there are so many countries I can work in.â€

Gemma admitted that it could be daunting facing up to having made the wrong decision. â€œI had already failed to get onto my original dream course so then finding out my alternative choice wasnâ€™t for me was disheartening,â€ she confessed. â€œIt was really hard to get myself up and try again but picking up the telephone to Kingston Universityâ€™s Clearing line was the best thing I could have done. I truly love my job. What more could I ask for?â€