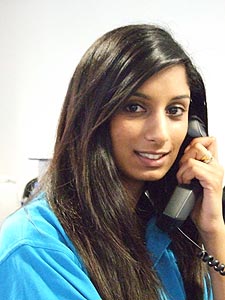 Sonu Matharu, from Croydon, had originally applied to do a Higher National Diploma (HND) at Kingston University but come results day the 21-year-old was thrilled to find her grades were high enough to study for a degree.Â  â€œWhen I opened the dreaded envelope, I was amazed that my A-Level grades were a lot better than I had expected,â€ Sonu said. â€œIt struck me that several of my friends, who had achieved similar grades to me, were planning to study for degrees and I realised that I could too.â€ she said. Calling the Clearing hotline couldnâ€™t have been simpler. â€œMy place was finalised in just a few days and the Clearing hotline operators and faculty staff were hugely encouraging,â€ she said.

Sonuâ€™s experience of Kingston was so positive that the following year twin brother Kamaldeep also applied to study at the University. Although they werenâ€™t identical in appearance their academic careers paths had been strikingly similar, Sonu admitted. â€œWe enrolled at Kingston within a year of each other, we have both been studying degrees in information systems and both of us found our course places through Clearing!â€ she said.

Last summer, Sonu was able to draw on her personal experience of Clearing when she signed up to offer a sympathetic ear as a Kingston University Clearing hotline operator. Joining a team of specially-trained academic staff and student volunteers, she manned the phone lines and took calls from anxious students hoping to grab the last few places on Kingston courses for the autumn. â€œIt was really rewarding to be able to use my own experience to help other people and I felt real empathy for what they were going through,â€ she said.

Whilst her brother is about to embark on the final year of his course, Sonu has just graduated from Kingston with a 2:2 degree.Â  She is currently investigating career options available to her and hopes that sheâ€™ll be able to secure a position in the heart of Londonâ€™s financial district.Â  â€œItâ€™s all very exciting but I am going to miss Kingston a lot,â€ she said. â€œIâ€™ve really enjoyed my time here and my course lecturers have been incredibly supportive.â€

In the meantime, Sonu has once again been asked to lend her expertise to the Kingston Clearing team.Â  This time round sheâ€™s been promoted to hotline supervisor, where she will not only be giving guidance to prospective undergraduates, but will also support fledgling hotline operators giving them guidance on the advice they offer.Â  With more than 8,000 phone calls from new students to the Clearing hotline expected this August, people calling in could rest assured they would be in capable hands, Sonu said. â€œThe Clearing system at Kingston works really well and it gives me great satisfaction to think that I will be setting hundreds of students on their career path.â€