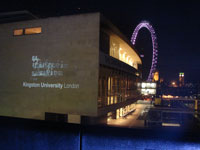 Road Runner, a giant animation by Kingston University students, received rapturous applause from the 800-strong audience at the London Sinfoniettaâ€™s 40th anniversary celebrations at the Queen Elizabeth Hall on the South Bank this week.

The six-minute animation was specially written to coincide with the concertâ€™s grand finale, a cartoon-inspired work by American composer John Adams, and was the first time that an animation has been screened by the Sinfonietta during a live performance. Earlier in the evening, a 10-minute film by Kingston students was projected on to the outside of the nearby Royal Festival Hall, running continuously on a loop, and their work was also on display in the Queen Elizabeth Hall foyer.

"There was such a buzz all over the South Bank," Jake Abrams, principal lecturer at Kingston University, said. "Outside, commuters, visitors, tourists, just about everyone was stopping in their tracks to watch the film, and inside the concert hall, the animation went down an absolute storm. It was magical."

A team of 20 third-year illustration and animation students from the University worked on the production. Dan Britt, 22, from Muswell Hill, North London, said it took about five weeks for his team of three to produce their one-minute segment. "We met the musicians, and they were so positive about our ideas that it really inspired us," Dan said. "After listening to the music, we decided to build a huge kaleidoscope and film through it for our section, so we could create the shapes and colours that the music evoked in our minds. Seeing the finished animation running in time with the live orchestra was just brilliant."

Kingston Universityâ€™s illustration and animation department has been working with the London Sinfonietta for five years, and Principal Lecturer Jake Abrams is the ensembleâ€™s current artist-in-residence.