Small and special – the lives of Victorian children revealed

Small and special – the lives of Victorian children revealed 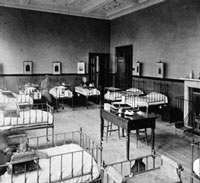 New touching stories offering a glimpse into the traumatic lives of poor, chronically sick children during Victorian and Edwardian times have been revealed thanks to a project undertaken by Kingston University and Great Ormond Street Hospital for Children NHS Trust. Around 10,000 records, detailing the admissions of children who went to the hospitalâ€™s Cromwell House convalescent home in North London, have been published on the Small and Special website – an online educational tool. These stories join more than 84,000 records of young patients who attended Great Ormond Street Hospital which have proved a popular resource for medical historians, demographers and people compiling family histories since the website went live last year.

"The new records make it possible to piece together the lives of some of the children, not only during their time at Great Ormond Street, but afterwards when they went on to recover at Cromwell House," Dr Sue Hawkins, research project manager, explained. "Life for some of these desperately sick children involved being passed from pillar to post. With so few hospitals willing to treat children, and their home circumstances not ideal for recovery, Great Ormond Street and Cromwell House were lifelines." Many children were from extremely poor families, and while in hospital and at the convalescent home they received good food, warmth, education and the best medical care available, she explained. 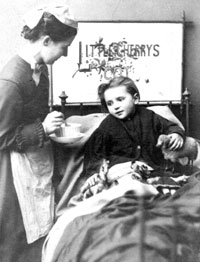 The site allows visitors to step back in time, tracing the paths of youngsters like six-year-old Sarah Coulson who was admitted on 16 August 1875 suffering terrible burns. She made the long, difficult journey to Great Ormond Street from her home in Derby. After her treatment she moved to Cromwell House but eight months later suffered a relapse and had to return to the hospital. A year later records show Sarah was back in Cromwell House and her burns had improved. She was finally allowed to go home after her mother pleaded with doctors for her return and in the 1891 census Sarah is listed as working as a waitress.

"Often, like Sarah, children were many miles from friends and family, and some spent months or even years moving between the hospital and convalescent homes in London, Margate, Brighton, Torquay, Eastbourne and Rhyl among others," Dr Hawkins said. "The records give a real glimpse into the hospital process, the way it was embraced by the public and the personal journeys made by patients." Cromwell House was paid for by donations and captured the hearts of the public. Local visitors brought flowers and fruit from their gardens, and a barrel organ, complete with dancing monkey, played outside the house in the summer. Wealthy lady supporters of Highgate even taught the patients how to read and write.

Compiled by academics and volunteers from Kingston Universityâ€™s Centre for Local History Studies, the Small and Special website marks the first time hospital records of such historic significance have been digitised, and the information will be a vital link for historians and those compiling family histories. It includes a database of admissions to the main hospital from 1852-1914, including the childrenâ€™s names, addresses, ages, symptoms and outcome, plus images of handwritten patient records and photographs and articles about the hospital. Cromwell House admissions are recorded from its opening in 1869 until 1904. Funded by Kingston University, the Wellcome Trust, the Nuffield Foundation and the Friends of Great Ormond Street Hospital, the database on www.smallandspecial.org is free of charge and available to all.

Dr Andrea Tanner, an archivist at Great Ormond Street Hospital, said the website and new records brought to life the early workings of the hospital. Evidence gathered shows 10 percent of the children visiting the Great Ormond Street between 1852 and 1914 were suffering from an infectious disease, one in five of whom died. "The information about children suffering from infectious diseases is quite revealing," she said. "The hospital was not supposed to accept children with such severe conditions but the doctors obviously felt unable to turn them away."