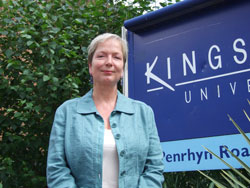 Hollywoodâ€™s love-hate relationship with smoking and the current fad for Jeremy Kyle-style confessional talk shows are just two of the topics that will come under the spotlight at a major international conference at Kingston University later this week. With a line-up of speakers and delegates from more than 20 countries, the three-day event will explore topics as diverse as addiction to computer games to obsessive love in modern romantic comedies. The portrayal of alcoholism, drug abuse and anorexia in literature and movies will also be major focuses at the conference which runs from 9 to 11 July.

Conference organiser Dr Andrea Rinke, a senior lecturer at Kingstonâ€™s School of Performance and Screen Studies, said observing the increased portrayal of drug abuse on the big screen had prompted her to organise the event. â€œNo-one has ever truly defined exactly what addiction is. Thereâ€™s a sliding scale between passion and compulsion to addiction and thatâ€™s what the academic experts will explore. Is it a compulsion or a choice, a lust for pleasure or a self-destructive disease?â€

Conference highlights include a session from one of Kingstonâ€™s own lecturing staff, Simon Brown, who will examine the end of Hollywoodâ€™s love affair with cigarettes in a session called Hollywood Addictions. These days, heroes and heroines were far less likely to light up than in the old, smoky film noirs of the 1930s and 40s, Mr Brown said. â€œEven in Die Hard, for example, Bruce Willisâ€™s unstoppable cop raced around Nakatomi Plaza blowing away the bad guys armed only with his wits, a sense of humour and a packet of Gauloises,â€ Mr Brown explained. â€œIn contrast, by 2007â€™s Die Hard 4.0, heâ€™d lost his addiction as well as his hair.â€

Other speakers include Professor Mark Griffiths, who is a world expert on gambling. The conference agenda also features playwright, poet and author Dr Jason Lee, from the University of East London. In a session entitled Till Deaf Do Us Part, Dr Lee will consider addiction to the â€œtalking cureâ€, looking at a range of film and television programmes including Big Brother, Jeremy Kyle, The Silence of the Lambs, The Sopranos and Fight Club. Meanwhile, Australian academic Daniel King, from the University of Adelaide, will probe the effects of playing video games to excess. He will discuss new evidence from a study examining the dramatic effects on playersâ€™ sleep, health and wellbeing and ask whether such a level of gaming should be classed as a behavioural addiction.

The packed conference programme would bring together psychologists, academics and sociologists from as far afield as Serbia and the United States to ensure issues were covered from a range of viewpoints, Dr Rinke said. â€œWith alcoholism, for example, weâ€™ll hear about addiction amongst Mexicoâ€™s poor, consider alcoholism as a disease and look at how drinking affected comedian Tony Hancock and his screen persona,â€ Dr Rinke said. â€œWeâ€™ll also be asking whether obsession and addiction are glamorised, condemned or normalised.â€ Other conference highlights include virtual obsessions, including the internet and extreme sexual fantasies; gambling addiction; cocaine and Hollywood during the 1970s and 80s; the portrayal of eating disorders in the German television soap Unter Uns; and the letters of Iris Murdoch to her lover, Elias Canetti.