Rocket scientist sees the funny side of things

Rocket scientist sees the funny side of things 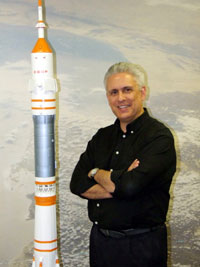 Astronautics and space systems feature strongly in science fiction but have seldom been the stuff of stand-up comedy – until now.Â  Dr Chris Welch, a principal lecturer from Kingston University whose mind is usually more focused on the distant realms of outer space, has unexpectedly found himself a new niche as an adviser on extra-terrestrial humour.

He has been drafted in to share his expertise with stand-up comedienne Helen Keen, who wanted to get the facts right for her debut at this yearâ€™s Edinburgh Fringe Festival. The 2005 winner of Channel 4â€™s New Comedy Writing Award and a contributor to BBC Radio Fourâ€™s The Now Show, Keen is using her Edinburgh slot as a launch pad for her latest show, It Is Rocket Science!.

The unlikely collaboration was born when Keen crossed paths with Dr Welch while he was giving a lecture at the Royal Aeronautical Society in London to celebrate the 50th anniversary of the Space Age. She promptly enlisted his help devising her show, which she describes as a celebration of star-gazing and the boundless possibilities of an infinite universe that emphasises the role of space engineers. â€œItâ€™s a whistle-stop tour around the great brains who put monkeys, ladies, dogs and gentlemen into orbit,â€ she said.Â 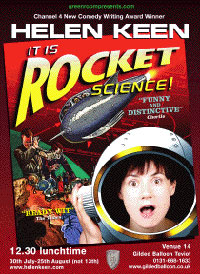 Dr Welch confesses that he had never thought celebrating half a century of human achievement in space would lead to so much ribaldry back on planet Earth. â€œThere I was delivering a lecture about what is, after all, truly a giant leap for mankind, only to be approached afterwards by someone who wanted to pick my brains to write jokes. The upshot was that I was asked to work with Helen and her writing partner, Miriam Underhill, on the content and background for It Is Rocket Science!,â€ he said. The trio set to work exploring a myriad of subjects, from rocket engines and the history of space exploration to some of the eccentric scientists involved. â€œTeaching students about rocket propulsion, space exploration and satellites is usually more up my street but it was a great pleasure to provide Helen with information and advice and Iâ€™m sure the show will be a huge success,â€ Dr Welch said.

Dr Welch is not the only fan of the show. The Institute of Physics was so impressed by the concept that it awarded a small grant for its development.

It Is Rocket Science! will be a daily feature of the Edinburgh Fringe Festival programme, staged at 12.30pm in the Gilded Balloonâ€™s Teviot Wee Room between 30 July and 26 August.