Designers of the future showcase their wares

Designers of the future showcase their wares 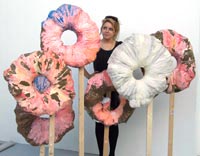 Giant doughnuts and a new Â£20 million teaching and learning facility were just some of the things which inspired students exhibiting at Kingstonâ€™s 2008 undergraduate design Degree Show entitled Out there.  Young designers of the future put their final collections on show at a week-long exhibition at the Universityâ€™s Knights Park campus.  The show, organised by the Faculty of Art, Design and Architecture, was a chance for artists, illustrators and architects to attract the attention of industry contacts, examiners and the general public. 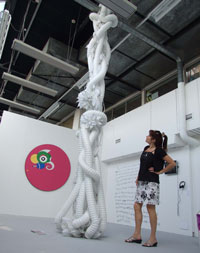 Highlights on display included a selection of screen prints on canvas by artist Will Gamblen which were sparked by the Universityâ€™s new John Galsworthy Building which opened in autumn 2007. The fine art third year has also produced a series of eye-catching screen prints entitled Spiral Car Park. Another exhibit attracting audience attention was created by fine art student John Brown. The giant doughnut display mounted on sticks, entitled You will never gain weight from a doughnut hole, brought a touch of humour to the show.

Landscape architecture students, including Adam Harris, were given the task of designing stages and equipment for use at festivals.  The 26-year-old former carpenter came up with a moveable outdoor wooden stage and exhibit stands with coloured roof-panels. Students also worked on the decor for a new photography studio which was looking to move premises. 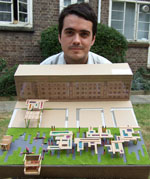 Dr Simon Ofield, Dean of the Faculty of Art, Design and Architecture, said the quality of work at this yearâ€™s show had been outstanding.  â€œOver the years Kingston University has produced many of the world's leading creative designers who have gone on to shape new thinking and work in different specialisms across the world,â€ he said. â€œThe work on display at the Degree Show demonstrates the very special character of art, design and architecture education at Kingston, clearly demonstrating that our students understand their particular practice within international contexts, are ready to challenge conventions and realise their potential to improve the world – locally, nationally and internationally.â€

Visitors to the Degree Show, which ran from Saturday 7 June and ran until Friday 13 June, were also treated to work from students from 3D design, communication design, fashion, art and design history.