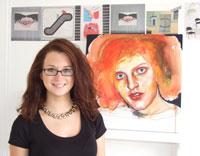 The performers werenâ€™t the only ones suffering from a case of first-night nerves as they waited in the wings for the United Kingdom premiere of composer Luigi Nonoâ€™s Prometeo last month. A group of second-year graphic design and illustration students from Kingston University also had a bout of pre-show jitters as classical music buffs converged on Londonâ€™s Royal Festival Hall for the eagerly-anticipated show. The imaginative undergraduates neednâ€™t have worried, however – the six works of contemporary art they had created to adorn the venueâ€™s vast foyer were soon receiving a rapturous reception from concert-goers.

The result of long-standing links between Kingston University, the Southbank Centre and the London Sinfonietta, the project gave the students the chance to use different design techniques to reflect their own interpretations of the late Venetian composerâ€™s work. They were encouraged to let their imaginations run wild after being treated to a special preview of Prometeo, revered in music circles as a challenging production featuring several orchestras, vocalists and narrators, with electronic effects thrown into the mix to manipulate the sound created.

With just a week to produce and install their exhibits before the Royal Festival Hall premiere, the pressure was on for student Alice Moloney and fellow second years from Kingston Universityâ€™s Faculty of Art, Design and Architecture. â€œThe performance itself was really powerful and so inspiring,â€ Alice said. â€œIt was amazing to hear how the sound of live instruments could be altered, shifted to a higher or lower pitch, switched to the other side of the auditorium or even made to disappear before re-emerging moments later.â€ 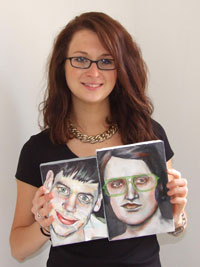 The 20-year-old illustrator, who immigrated to the United Kingdom from Australia nine years ago, decided to team up with three graphic design students to create a show-stopping abstract made from hand-painted willow twigs. Suspended from the ceiling at the Royal Festival Hall, the vibrant red artwork reflected the complex make-up of the piece and the impact it made when listened to in its entirety. â€œIt struck me that parts of the performance sounded quite awkward on their own but, when they were all brought together, made a really dramatic statement resonating around the auditorium,â€ Alice said. â€œI wanted to capture the musicâ€™s complicated framework, the spectacular impression it made and the natural beauty of the music, which is why I decided to use quite literally hundreds of willow twigs to create my installation.â€

Other exhibits chosen to take centre stage at the Royal Festival Hall included black and white drawings fixed to the front windows, images projected on to the floor and around the auditorium and a speaker-top display featuring liquid pulsating to the music. Principal lecturer in illustration and animation Jake Abrams said his students were no strangers to showcasing their talents in some of the capitalâ€™s best-known cultural venues. â€œIâ€™m a strong believer in getting them out into the real world so they can take part in event-based learning that really stretches their ability and ingenuity,â€ Mr Abrams said. â€œBeing linked with such a major production was an opportunity that more established names on the art and design scene would have been clamouring to take advantage of, so it was a phenomenal achievement to have students from Kingston University handpicked to be involved. Their brief was to make the worlds of music and art collide – something they accomplished with magnificent effect – and they really deserve to step forward and take a bow for the way in which they embraced the challenge.â€

The London Sinfoniettaâ€™s participation manager, Anna Rice, praised the students for producing a series of thought-provoking exhibits that had proven true crowd-pleasers. â€œThe originality and quality of work that went on show was a real high note of the premiere,â€ she said. â€œThe students provided the perfect illustration of the way in which contemporary classical music can serve as the inspiration for new work across a much wider creative spectrum.â€