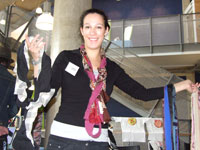 Unwanted clothes are getting a new lease of life thanks to a scheme set up by four Kingston University students. Young entrepreneurs Larissa Van Hemert, Chang Bae Seo, Yen Hui Hou and Jessica Kim Lee are the brains behind Creative Swarm – a business which transforms tired skirts and shrunken tops into colourful scarves for day and evening wear. The green concept was concocted by the foursome while studying on Kingston Universityâ€™s new MA in Creative Economy programme. This course was launched to give students with arts or humanities backgrounds access to business know-how, and to provide those hailing from the world of business management with a better understanding of the creative process.

Larissa, who is originally from Rotterdam in Holland, said the programme at Kingston had helped her to develop the business acumen needed to make her ideas profitable. â€œIâ€™m good at coming up with creative concepts but, before I started the course, I didnâ€™t have a clue about profit margins or business plans,â€ the 24-year-old said. â€œIâ€™m learning how to turn my ideas into workable future businesses.â€  The team had been determined to set up a green company and make people aware of the importance of recycling their clothing.  â€œWeâ€™ve been sourcing the materials from donations and from charity shops and selling them at the University and at trade fairs,â€ she said.

The projectâ€™s managing director, Jessica, 29, who is currently living in Wimbledon but is originally from Essex said her future dream goal would be to set up an international network of people across such disciplines as fashion and business to take part in the project. â€œCreative Swarm has a strong international flavour because our team includes students from Taiwan, Korea and Holland,â€ she said.

Former IBM manager Chris Williams acted as volunteer mentor on the project and described the course as a marriage between creativity and business. â€œThe aim is to take someone who is artistic and wrap a set of business skills around them which may include market research, product development or sales,â€ he explained. â€œToday it isnâ€™t enough to be creative.  To be successful students need to combine two sets of skills – artistic and business.â€ Mr Williams is confident the course will create more rounded graduates with real-world skills and all-important practical experience. â€œLooking ahead, graduates from this course would immediately be valuable to employers in the creative industries, although many are likely to end up running their own businesses,â€ he said. 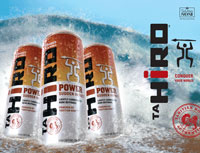 Creative Swarmâ€™s eco-friendly scarves, sold under the companyâ€™s Life Style brand, had proved such a hit with customers that the successful team had been spurred on to expand into new areas, Jessica Lee said. â€œWe are about to burst into the health and well-being sector with the launch of TaHIROâ„¢Power –  a new health drink containing Tahitian Noni Juiceâ„¢ from nature's ultimate tropical super-fruit, the 'Noni',â€ Jessica explained. â€œWe are thrilled to be working with Tahitian Noni International (TNI) on our new Well-Being brand. TNI has transformed the lives of thousands helping turn French Polynesia from Third World to Developing nation status and is recognised as being among the top five fastest growing ethical businesses in the world.â€