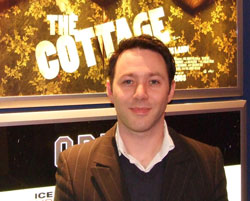 One of Britainâ€™s hottest young directors has showcased his latest film to students after being snapped up to work as a visiting professor at Kingston University. Paul Andrew Williams held an exclusive screening of his new work, The Cottage, at Kingstonâ€™s Odeon cinema ahead of its general release later this month.

Set in a remote part of the countryside, the Cottage is a dark comedic tale with the action revolving around the fates of clueless kidnappers, mob assassins and a psychopathic farmer. Feuding brothers David (Andy Serkis – King Kong, Lord of the Rings) and Peter (Reece Shearsmith – The League of Gentlemen), set aside their differences to make some fast money by kidnapping Tracey, played by former Chicago star and Brookside actress Jennifer Ellison, the daughter of a feared mob boss. Matters take an unexpected turn for the worse when they discover something terrifying lurking in the darkness and embark on a comic battle for survival.

Mr Williams, whose first film London to Brighton won critical acclaim around the globe, said The Cottage was a total departure from his earlier work. â€œAudiences can expect the experience to be like being on a ghost train – we want people to feel prickles of fear while also laughing at the humour in the film,â€ he said. â€œI was particularly interested in capturing the relationship between brothers because siblings communicate with each other in a very specific way. There is always a certain bond that, no matter how stretched, will always be there.â€

The Kingston premier of The Cottage marked the launch of Mr Williamsâ€™ collaboration with the University which will see him passing on tips to young people hoping to one day follow in his footsteps. â€œIâ€™m looking forward to working with the students,â€ Mr Williams said. â€œAs a filmmaker Iâ€™m always learning and observing, so Iâ€™m hoping to gain as much from my association with the students as they will from learning how I launched my career.â€

Kingston Universityâ€™s director of film and television studies, Dr Will Brooker, said it was an enormous privilege for the students to be working with such a rising star in the industry. â€œAs one of the countryâ€™s brightest new writing and directing talents, Paul has a great deal to offer our students. There is no better way to learn the trade than by hearing from a true master of the big screen and observing his work first hand,â€ Dr Brooker said.