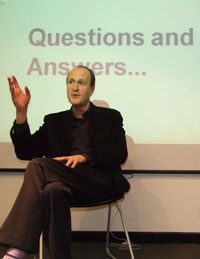 Advertisers need to embrace new technology to survive in the digital age, the former chairman of Endemol Peter Bazalgette has warned. Mr Bazalgette, credited with being the driving force behind television sensations Big Brother, Ready Steady Cook and Changing Rooms, claimed developments in digital technology were altering the traditional dominance of television, when he addressed a packed lecture theatre at Kingston University. However the advent of video sharing website You Tube and social networking website MySpace, creating what he dubbed the disruptive economy, also opened up new opportunities for young entrepreneurs, he said.

Digital technology had thrown up fresh challenges for people from traditional business backgrounds as well as for the television and music industries, Mr Bazalgette, who now runs his own media consultancy business, said. Â â€œThe way in which video can be downloaded for free and passed from peer to peer is posing a huge threat to those who own a piece of television or film,â€ he explained. â€œBut it also creates greater opportunities for young people to showcase their talents and be snapped up by conventional media organisations, and for advertisers willing to work with new mediums. By attaching adverts to downloadable video clips, for example, their messages could actually become more targeted to specific consumer groups.â€

Big Brother, in which the lives of contestants are scrutinised around the clock in a house full of cameras, was an example of a shift in television developing the idea that entertainment could be enjoyed in a range of different digital forms, Mr Bazalgette said. â€œFor the first time viewers could watch footage of the contestants streamed live on digital television channels and visit the Big Brother website for social interaction about the show,â€ he said. â€œThey could also vote for which contestant they wanted to leave the show, helping shape its direction, and even download clips and news straight to their mobile phones.â€

The decision to show live footage of the contestants in the Big Brother house and to screen a half-hour edited version of the dayâ€™s events in the evening had led to a great deal of discussion, Mr Bazalgette said. â€œThe programme put users in the position of being able to comment on the way the material had been edited to construct a narrative,â€ he explained. â€œNo two movie directors would cut down the same material in exactly the same way and Big Brother was the first time people watching could form a view on which footage had been used and which had been left out.â€

Fellow speaker David Fletcher, executive director of Kingstonâ€™s new Rose Theatre, said performance venues faced their own particular challenges in the current climate. â€œLeadership is obviously an important factor in the creative economy. Itâ€™s that balance between how much is generated by one brilliant person and how much arises from the group dynamic. But the drive must come from the artists.â€

Senior lecturer Nick Wilson, from Kingston Universityâ€™s Faculty of Business and Law said the lecture, staged as part of a series examining the Entrepreneurship Experience, was particularly timely coming just as the British Government was formulating policy on the creative economy. â€œThe creative economy has sprung to attention not just in this country but across the world and will be a key area for many of our graduates when they pursue their careers,â€ he said.