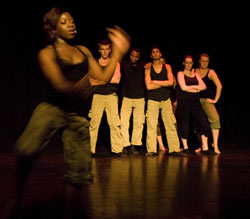 As a West End star and former backing dancer for some of the biggest names in the pop world, Jason Piper is well accustomed to gruelling training schedules, flying around the globe and performing in front of audiences of thousands. But he describes the preparation for his latest show, at Kingston University in South West London this month, as his most daunting so far. This time the 31 year old did not find himself centre stage, instead making way for 60 first year students from the Universityâ€™s new dance degree who have lapped up his expert tuition during the past year.

Mr Piper, who performed in singer Kylie Minogueâ€™s sell-out Fever world tour, began running Kingstonâ€™s new BA joint-honours degree in dance last September teaching urban, ethnic and popular dance styles as well as more conventional classical and contemporary dance. With 27 years industry experience under his belt, the dancer, whose other critically-acclaimed performances include playing the lead role in the all-male version of Swan Lake, said he felt ready for a change and was enjoying the move into academic life. â€œPerforming around the world was an amazing experience and I was lucky to get through it with no injuries, never missing a show, but I eventually felt that I wanted to share that knowledge,â€ he said. â€œOver the years Iâ€™ve worked in many areas of dance and the Kingston course is packed with diversity which is one of the things that really appealed to me when I took the job. Iâ€™ve found making the change from dancer to lecturer has been the most challenging of my life so far physically, academically and spiritually but Iâ€™ve loved every moment.â€

Mr Piperâ€™s first year in the job culminated with the launch of the Kingston University Dance Show at the Reg Bailey Building on Wednesday 7 May. The audience, at what he hopes will become an annual event on the University calendar, was treated to a demonstration of the studentâ€™s natural talent and the techniques they had acquired throughout the year. â€œWe encourage students to work in a wide variety of styles and take a broader approach to dance than many other courses do,â€ Mr Piper said. â€œWe aim to explore the different disciplines through written and physical work – imagine combining Indian dance with hip hop and then consider what that says about British culture. Thatâ€™s what we do.â€

The experience Mr Piper brings to Kingston from his professional career has made him a hit with students such as 23-year-old Chardine Wadley, from South Croydon, who has just completed her first year. â€œIâ€™d seen Jason in Swan Lake twice and I really admired his determination to succeed in such a wide range of genres despite not coming from a traditional dance background,â€ she said. Chardine, who has been dancing since she was five, had planned to study sports science, but when she spotted the Kingston dance course knew it was for her. â€œIâ€™ve always been interested in a broad variety of styles from contemporary to ballet, tap and jazz and the course has taken a really creative look at the art of dance and helped me to take my performances to another level,â€ she said. Chardine hopes to use the experience gained as part of her degree to go on to produce dance videos or set up a dance school. 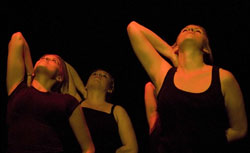 During the next two years of their joint honours course, students will capitalise on the vibrant multicultural dance scene in London, getting involved in community dance and forging links with festival organisers. As well as paving the way for students to become dancers and choreographers, the course would also provide a strong footing for those considering outreach and youth work, Mr Piper said. To help them along the way he has set his sights high. â€œWeâ€™ve got people coming in from the top end of the top end of the industry to work with the students,â€ Mr Piper said. â€œItâ€™s my aim to build and develop industry relationships right from the start so we can make Kingston one of the strongest dance courses on offer not just in the United Kingdom but internationally.â€

Frank Whately, Head of Performance and Screen Studies, said students at Kingston were benefitting immensely from Mr Piperâ€™s years in the industry. â€œThe University is privileged to have such a high calibre tutor to inspire undergraduates,â€ Mr Whately said. â€œWhatever their background, our joint-honours BA in dance enables students to explore their individual identity and relationship with the wider community through dance.â€