Theyâ€™ve let their imaginations run wild and drawn their inspiration from all walks of life. Three trend-setting Kingston University fashion students reveal the stories that lie behind their final-year collections. 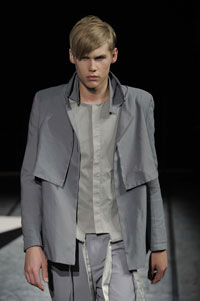 Twenty-one-year-old Kasha Cramptonâ€™s menswear range was sparked by a trip to America. After winning a Kingston University competition, Kasha spent last summer working with Brooks Brothers in Manhattan and became fascinated by the homeless people living on the streets near the famous designerâ€™s store.  Kasha, who has also worked with JJ Hudson-famed for his customised clothing including shoes made from reworked materials, said developing their collections for the Kingston University Fashion Show the show had been a chance for her and fellow students to let their imaginations run wild. â€œI chose to include a lot of outerwear inspired by my time in America,â€ she said.  â€œI became fascinated with the peripheral figures who roamed the streets and had made themselves garments from bits of clothing discarded by other people. I did some research and was struck by the fact that one personâ€™s waste could be anotherâ€™s treasure and that was what really inspired my collection. Iâ€™ve even used materials from some of my old coats to add details to collars and cuffs on new clothes.â€ 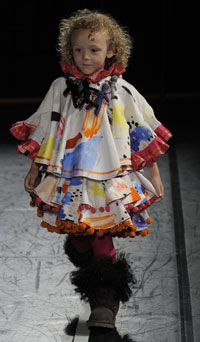 Also hitting the runway was a childrenswear range dreamt up by 23-year-old Laura Harvey. Drawing her ideas from outfits worn by environmental protesters, Laura gathered snapshots and information from Glastonbury festival-goers and traced eco-warriorsâ€™ clothing preferences right back to their roots. â€œI was interested in how, despite the fact they were trying to put across serious issues, they often opted to wear laid-back, casual clothing,â€ she said. â€œI decided to take my research back a step further and look at where the styles originated from. I found that there was often a military influence with hard-wearing, outdoor items mixed with lots of chunky knits and an ethnic theme. There was even a fun element with some clothes reminding me of those you might see in a carnival.â€ This particularly fired Lauraâ€™s imagination, prompting her to explore costumes in Bolivian carnivals and create her own take on these styles. The result was a vibrant collection boasting three knitwear pieces, personalised prints, jumpsuits, hats and jewellery.

Children and parents at St Johnâ€™s Primary School, in Kingston, also helped Laura to research her collection. â€œI wanted to hear about what interested the children and get a feel for what they liked wearing,â€ she said. â€œMy collection is about treating children as individuals and not as mini-adults. They loved bright colours so Iâ€™ve used lots in my range. Iâ€™ve also been conscious about the issues environmental protesters are concerned about – so I looked carefully at whether I used man-made or natural products. Where I could, Iâ€™ve used organic cotton, vintage denim and reworked fabrics that I found on market stalls.â€ 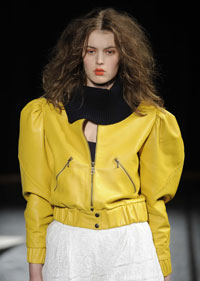 Fellow fashion student Harriet Carp could often be found in Portobello Market hunting out materials for her womenswear range, entitled Dutch Courage, in the run up to the show. Uncovering some old family photographs tucked away in her home in Holland sowed the seeds for Harrietâ€™s collection. â€œMy range is based on nostalgia and the garments are quite child-like so there are a lot of pompoms, knit pieces and vintage effects,â€ she explained. â€œI wanted to use Brussels embroidered lace but it was very hard to source so I went to Portobello market and scoured eBay looking for old nightdresses and fabric I could use,â€ the 22-year-old said. â€œIâ€™ve incorporated lots of details such as gathering at the back of the dresses and Iâ€™ve twisted fabrics and woven them together.â€


Warning: include(../../../../../includes/php/tonic/elements/press/contacts.php): failed to open stream: No such file or directory in S:\AlexLiveSite\news\archive\2008\may\29-Clothing-with-a-conscience-creates-a-stir-on-the-catwalk\Students-share-secrets-behind-catwalk-success\index.php on line 42