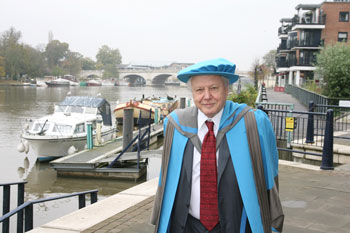 One of the nationâ€™s most revered broadcasters and naturalists has been awarded an Honorary Doctorate by Kingston University, in South West London. Sir David Attenborough, who has dedicated his life to making science more accessible to the public by producing hundreds of pioneering wildlife programmes, was named an Honorary Doctor of Science in a ceremony at Kingstonâ€™s Rose Theatre.

Sir Davidâ€™s long-list of achievements includes producing more than 20 natural history programmes as well as a series of publications. The naturalist, broadcaster and television executive became a household name as the voice of wildlife documentaries, narrating more than 250 programmes for the BBCâ€™s Wildlife on One and Blue Planet. Other major series he worked on included Planet Earth and the 13-part Life on Earth which attracted an estimated 500 million viewers. He released his critically-acclaimed biography, Life On Air, in 2003. 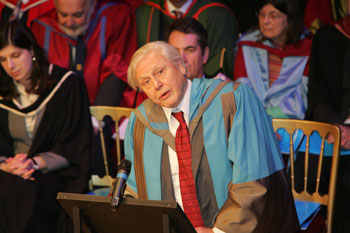 Born in 1926 and brought up in Leicester, Sir David went to Clare College, Cambridge, where he studied natural sciences, graduating in 1947. Following two years National Service in the Navy, Sir David got his first taste of broadcasting on a placement at the BBC. He quickly rose through the ranks, eventually taking charge of all non-fiction broadcasts, including viewerâ€™s favourites The Pattern of Animals and Zoo Quest. From 1965 to 1969 he worked as controller of BBC2, introducing a wide range of programmes which were to become screen stalwarts, such as live snooker, Match of the Day, the Likely Lads and Mastermind. He was also a key figure in the advent of colour television broadcasting.

After a stint as Director of Programmes with editorial responsibility for BBC television networks, Sir David resigned in 1973 to return to programme-making responsible for inspiring a new generation of viewers. First came Eastwards with Attenborough, a natural history series set in South East Asia, then The Tribal Eye examining tribal art. In 1979 he began the most ambitious series ever produced by the BBCâ€™s Natural History Unit, the 13-part series Life on Earth which he wrote and presented. Its sequel, The Living Planet, came five years later in 1984 and, in 1990, the final part of the trilogy The Trials of Life was broadcast. He went on to mastermind Life in the Freezer (1993), The Private Life of Plants (1995), The Life of Birds (1998), The Life of Mammals (2002) and Life in the Undergrowth (2005) all of which received a string of national and international awards.
When not on screen or making programmes, Sir David has served as President of the Royal Society for Nature Conservation and as a trustee of the British Museum and the Royal Botanic Gardens Kew. Knighted in 1985, he received the Order of Merit in 2005 and holds a number of other accolades including a Fellowship of the Royal Society.

Sir David, who accepted his Honorary Doctorate of Science in front of a packed audience of Kingston University science graduates, said he was thrilled to receive the award. â€œWhat Iâ€™ve found important during my career is to come up with innovative ways to translate science into accessible, exciting material for the layperson,â€ he said. â€œIâ€™ve enjoyed meeting many young scientists at the graduation ceremony today who I hope will go on to make vital discoveries in the future and continue to ensure science is portrayed in an understandable way.â€

Sir David is not the only member of the Attenborough family to hold a Kingston University honorary degree. His elder brother, screen legend Lord Richard Attenborough, was awarded an Honorary Doctorate of Art from Kingstonâ€™s Faculty of Arts and Social Sciences in January 2007.

Dr David Mackintosh, Dean of the Faculty of Science, said Sir David was a tremendous inspiration to the next generation of young scientists and broadcasters. â€œSir David is an iconic figure who has been very successful not only in the world of science but in increasing the public understanding of scientific work through his groundbreaking broadcasting,â€ he said. â€œHis appeal stems from his ability to share his genuine enthusiasm and love for the natural world. Our students can learn a lot from his calm and distinctive presence and the way he commands attention without upstaging his subject.â€