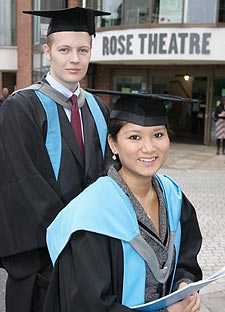 Hundreds of graduates from the Faculty of Science took centre stage at the Rose Theatre this week as Kingston University hosted its first graduation ceremony for a generation on home soil.Â  The theatre was packed to capacity at the all-day event which celebrated the successes of almost 600 science graduates.

Vice-Chancellor Professor Peter Scott commended the graduates on their achievements and described the day as a very important one for Kingston in more ways than one. â€œThis is the first time for many years that Kingston University has held an awards ceremony in the borough and it is the very first time we have held a ceremony in the Rose Theatre, so you are pioneers,â€ he told the assembled graduates. â€œWe hope hundreds and thousands of graduates will follow in your footsteps in years to come.â€

Gareth Clubb from Ebbw Vale in South Wales, who graduated with first class honours in communications systems, could scarcely believe that the day had finally arrived for him to collect his degree.Â  â€œIâ€™ve always enjoyed the science behind communications and my course allowed me to develop as a person both academically and socially.Â  Itâ€™s been so rewarding to come back to Kingston for this ceremony, having lived literally next door to the Rose when I was studying and itâ€™s great that the university has been able to help develop the area through its involvement with the theatre,â€ said the 22 year old.Â  Sports fan Gareth is already putting his studies to good use, now working as a web developer designing websites for sports organisations.

Also starring in the theatre graduation ceremony was 22 year old Vanezza Zabert, who graduated with first class honours in sports science and business as well as scooping the UCB Pharma Prize for the best joint honours student. â€œCelebrating my graduation in the place where I studied, gives it a much more personal feel,â€ she enthused.Â  She is now taking a gap year before going on to study for a Master in Public Health next year.

Joining the students on their big day was one of the nationâ€™s best known broadcasters and naturalists, Sir David Attenborough, who stepped forward to receive an Honorary Doctor of Science.Â  â€œIâ€™ve enjoyed meeting many young scientists at the graduation ceremony who I hope will go on to make vital discoveries in the future and continue to ensure that science is portrayed in an understandable way,â€ he said.

The Rose Theatre opened in January 2008 and is inspired by the former 16th century Rose Theatre on Londonâ€™s Bankside, boasting a 900-person capacity auditorium.Â  The university has been a strong supporter of the venue since it was first mooted and has close links with the Rose Theatre Trust.

Previous Faculty of Science graduation ceremonies have been held at The Barbican Centre in Central London.Â  â€œThe ceremony is a really momentous occasion allowing us to showcase the success of our graduates to the borough,â€ Dr David Mackintosh, Dean of the Faculty of Science, said.