Winners have designs against fur

Winners have designs against fur 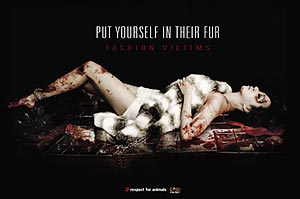 It was designed to shock – and it certainly caused a stir, scooping second place in Design Against Fur, a competition with a conscience.

Kingston University students Daniel Jon and Jessica Baekâ€™s dramatic image of a blood-splattered model draped in fur has beaten off competition from more than 500 students at universities and art colleges around the United Kingdom.Â  Organised by the campaign group Respect for Animals, the contest challenged entrants to produce a poster with a strong animal protection message, aimed at raising awareness about the fur trade.

Setting up the shoot at one of Kingston Universityâ€™s photographic studios, using a professional model draped in fake fur, took several hours. â€œWe wanted to provoke the viewer,â€ Daniel, 24, said. â€œAt first glance, our image looks like a cinema poster with a model reclining in an elegant pose. Then the blood on her body becomes more evident and the full horror of the image sinks in. Our message is that if people were in their fur instead of their own skin, they would be feeling a lot of pain in that situation.â€

The pair also carried off the Persula Award, which is given each year to a single entry by national charity The Persula Foundation.Â  Judges from the Foundation viewed all the entries without knowing whether they are winners in the main competition. They collected their prizes from MP Vernon Coker at an awards ceremony held at Londonâ€™s Dreamspace gallery.

Â â€œDaniel and Jessicaâ€™s design communicates an important message – that the overwhelming majority of people do not want to buy real fur, and retailers need to take this message on board,â€ Nicki Brooks, Respect for Animals director, said.

Senior lecturer in graphic design, Marion Morrison, said it was no surprise that her Kingston University students had caught the judgesâ€™ eyes. â€œBoth Daniel and Jessica have the energy and drive to solve design problems in an informed and inventive way. They especially enjoy the debate around challenging topics – as demonstrated by their work for the Design Against Fur campaign,â€ Ms Morrison said. While Daniel has remained at Kingston following his graduation to continue his studies with an MA in Screen Design for Film and TV, Jessica has now returned home to her native Korea.