Student makes bid to row his way into the record books

Student makes bid to row his way into the record books 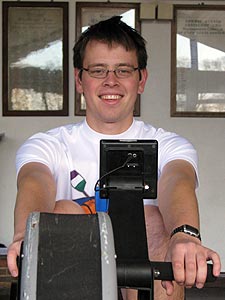 When student rowing coach Peter Brewer slipped a disc in his back earlier this year, his chances of rowing competitively in the current season looked slim.Â  Â Never one to shy away from a challenge though, the MA Sports Marketing student from Kingston University was determined to find a different way to maintain his technique and get back to full fitness.

Reading about a world record set for rowing one million metres on a rowing machine at Bristol Zoo earlier in the year, the 24 year old had a brainwave.Â  He decided to throw down the gauntlet to see if he could claim the record title for himself.

Now, after months of training, Peter is set to embark on his record-breaking attempt at Kingston Rowing Club in mid December and estimates the challenge will take around five days to complete.Â  He plans to row for 45 minutes, take a 15-minute break and then repeat the process for another 20 hours.Â  After that he will snatch a mere four hours sleep before starting the whole cycle again. Peter is set to burn off approximately 12,000 calories a day during the attempt.

Although this is the first time he will have attempted something quite so ambitious, the self-confessed showman is no stranger to tests of endurance, having rowed for miles on a charity day last year in front of crowds at a Windsor department store.Â  Peter hopes that his rigorous training will pay off and that heâ€™ll come out all the more confident in having achieved his goal. â€œYou really donâ€™t know who you are until youâ€™ve stretched yourself to your limits,â€ he said.

As well as achieving his personal goal, Peter has the added incentive of raising almost Â£10,000 for three charities if he smashes the record.Â  He has chosen to support the Everyman cancer charity and a new playground project for Merton Primary School as well as rowing organisations.Â  â€œItâ€™s easy to give money to charities but far more rewarding to actually earn it for them,â€ he said.

Peterâ€™s passion for rowing stems back to his school days and since then has gone from strength to strength. During his classical studies degree at Royal Holloway, University of London, he was secretary, coach and captain of its rowing club and heâ€™s kept up his interest since arriving at Kingston to start his MA. His sports marketing course is sponsored by the Amateur Rowing Association and paid for by the Henley Stewards Charitable Trust which aims to encourage new coaches into rowing.

Peterâ€™s long-term goal is to coach at a club where he can really make a difference. â€œStudying at Kingston has provided me with a great opportunity to thrive as a rower,â€ Peter said. â€œThe universityâ€™s partnership with Kingston Rowing Club means that students have access to all its facilities and are part of one of the United Kingdomâ€™s flagship clubs. I hope my attempt on the world record will spread the word about the great opportunities at Kingston and its fantastic riverside location.â€

Peter and his Kingston course-mates are already busy promoting the world record attempt which they plan to broadcast live over the internet.