Kingston space graduate propels her career towards the stars

Kingston space graduate propels her career towards the stars 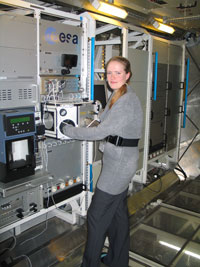 A Kingston University aerospace graduateâ€™s career has taken off in a spectacular way, since she has been snapped up by the European Space Agency. Victoria Lowe, who completed a Masters in Aerospace Engineering and Astronautics this summer, has secured a one-year young graduate trainee position at the European Space Research and Technology Centre, in Noordwijk, the Netherlands. The prestigious posting will see the 24 year old step into laboratories to work on state-of-the-art spacecraft technologies.

Victoria, who dreams of becoming an astronaut one day, said the space agency signing would allow her to hone her skills in astronautics which she had first developed at Kingston. "The area I am working in is known as spacecraft propulsion," she explained. "Iâ€™ll be working with a very experienced team, designing the systems that help keep satellites orbiting in space and that reposition spacecrafts if they get knocked-off course." The Kingston graduate hopes to explore different aspects of propulsion and will also look at ways to launch rockets during the course of her placement.

Having become intrigued by space from an early age, Victoria built on her love of astronautics while completing a one-year foundation course in engineering at Kingston and went on to study for her Masters degree in Aerospace Engineering and Astronautics. "Iâ€™d always been fascinated by the solar system and knew I wanted to be involved with space exploration in some way," she said. "I opted for the foundation engineering course at Kingston because it provided a thorough grounding in engineering, applied maths and physics. It really opened the door for me to pursue my space interests further and after that I was able to specialise in aeronautics."

Working with external companies as part of her courses further bolstered Victoriaâ€™s confidence including a final-year project sponsored by Abingdon-based Reaction Engines, where she worked on a design for an engine to go in a spaceship that may be used to transfer crew between Mars and space. "This craft, known as a martian ferry, would refuel from chemical resources processed on the planet surface, avoiding the need to carry vast quantities of fuel from Earth," she said.  As well as a six-month placement studying at the California Polytechnic State University, Victoria also spent a sandwich year placement working on satellites with IT and business services giant, Logica, where she enhanced her project management skills.

Victoria follows in the footsteps of fellow Kingston aerospace graduate Alison Gibbings, who was selected for a special 10-week programme at the prestigious NASA Academy last summer, before moving to work on ExoMars, Europeâ€™s mission to explore the Red Planet. Dr Chris Welch, from Kingston Universityâ€™s Faculty of Engineering, said it was a coup for yet another Kingston graduate to be selected by the European Space Agency. "It is a testament to the Universityâ€™s academic excellence in astronautics and space technology," he said.

A posting to the Netherlands was not the only bit of excitement Victoria has had to contend with this year. Since graduating she has married high school sweetheart James Lowe who is also a former Kingston student. After returning from her honeymoon it was straight over to the International Astronautical Congress in Glasgow where she delivered a presentation as part of the student paper competition, before jetting off to the Netherlands. And it looks like there could be plenty more excitement ahead. After her year with the Space Agency, Victoria hopes to be taken on full-time with one of the sub-contractors which works with the agency or could pursue further research in astronautics. And if there is a seat on the next rocket launch available, she would always be happy to step in. "I canâ€™t imagine people who work in the space agency not wanting to go there themselves," she said. "Iâ€™d definitely like to get there one day, either as an astronaut or as a space tourist."