Made in Kingston: accomplished alumni star on Wall of Fame

Made in Kingston: accomplished alumni star on Wall of Fame 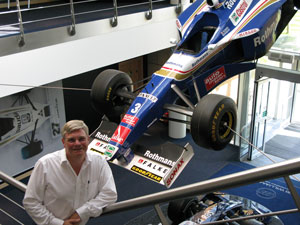 A Hollywood heartthrob, a former England rugby captain and a top Formula One racing engineer are some of the famous faces set to star in a special exhibition at Kingston University. The trio have been selected to feature on a new Wall of Fame at the University, in South West London, paying tribute to the achievements of some of its most high-flying graduates. They join more than 20 accomplished alumni from the worlds of business, law, fashion, science, architecture, design and sport whose photographs will be hung in a permanent display at the Universityâ€™s John Galsworthy Building.

The youngest graduate to feature in the wall is 27-year-old screen star Ben Barnes who, as the lead in Disney film The Chronicles of Narnia: Prince Caspian, has become a household name not only in the United Kingdom but across the globe. Despite achieving worldwide fame Ben said he was delighted to appear on the wall and retained an enormous soft spot for the institution at which he had honed his skills. â€œKingston University allowed me the freedom and choice to pursue my dreams,â€ he said. After graduating in Drama with English Literature in 2004, Ben landed a role in the National Theatreâ€™s West End production of The History Boys before being snapped up to play Prince Caspian. He is now a firm favourite with casting directors with his next film, a remake of Oscar Wildeâ€™s A Picture of Dorian Gray, due to be released shortly.

Also honoured in the gallery is Wasps Rugby Union Football Club player Lawrence Dallaglio, who studied urban estate management at Kingston in the 1990s, before being made captain of the team and picked to play for England. â€œKingston provided a terrific environment for developing my sports and team skills – and was wonderfully close to Twickenham Rugby Stadium,â€ the former international said. The galleryâ€™s sporting contingent also includes Williams Formula One engineer Brian Oâ€™Rourke, whose design and materials innovations have boosted the careers of racing drivers like Nigel Mansell and Damon Hill. The chief composites engineer for Williams Grand Prix Engineering, still speaks fondly of his time at Kingston where he gained a BSc in Aeronautical Engineering. â€œI learned that a clever engineer is the one with the simple answer,â€ he said.

The Wall of Fame was created by Kingston Universityâ€™s Development team which wanted to showcase the achievements of alumni by highlighting their talents in a central point within the University. â€œOur research showed students and graduates were very interested to hear about their predecessors who had gone on to rise to the top in their chosen careers,â€ Dr Helen Trott, the University's Head of Development, said. â€œSimilarly our graduates always praise the teaching theyâ€™ve received from Kingstonâ€™s lecturers and the pivotal role they played in their professional development, so we also saw the wall as a chance to celebrate this strength.â€ The range of celebrated alumni reflected the breadth of both traditional academic and more vocational courses offered at the University, Dr Trott said. In the longer term, the University plans to expand the Wall of Fame gallery as current students graduate and move up the career ladder.