Hollywood star to take centre stage in Wall of Fame

Hollywood star to take centre stage in Wall of Fame 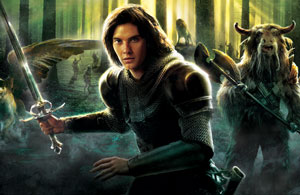 Big screen heartthrob Ben Barnes might not have made it to the Hollywood Walk of Fame just yet, but heâ€™s about to take a starring role in one closer to home. Ben, 27, is set to become one of the glittering graduates taking centre stage in Kingston Universityâ€™s new Wall of Fame. The swashbuckling star of Disneyâ€™s Chronicles of Narnia joins more than 20 accomplished alumni from the worlds of business, law, fashion, science, architecture, design and sport whose photographs will be on permanent display.

Benâ€™s star potential was spotted and nurtured by staff at Kingston and, after graduating in 2004 with a first class honours degree in Drama with English Literature, he was chosen by Disney to play Prince Caspian in The Chronicles of Narnia, starring alongside Liam Neeson and Tilda Swinton. Weeks of horseriding and swordfighting lessons followed, and when the film was launched earlier this year, an eight-storey high billboard of Ben brandishing his sword towered over Los Angelesâ€™ Sunset Strip. Now a firm favourite with casting directors on both sides of the Atlantic, Benâ€™s next film, a remake of Oscar Wildeâ€™s A Picture of Dorian Gray, is due for release shortly. But Ben hasnâ€™t forgotten where it all started, and still retaining a soft spot for the University, he said he was delighted to appear on the Wall as its youngest graduate. "Kingston University allowed me the freedom and choice to pursue my dreams," Ben said.

Head of Kingston Universityâ€™s School of Performance and Screen Studies, Frank Whately, said he knew from the moment he first met Ben that he would be destined for great things. "Whatâ€™s great about him is that heâ€™s so much more than just a glamorous young actor," Mr Whately said. "Iâ€™ve known Ben since he was at school, and his star potential was evident even back then. Having seen his performances develop from school age, through his time here at the University, I never had any doubt that he would make a mark on stage and screen, both in Britain and in Hollywood.  He is highly intellectual, hugely talented and Iâ€™m sure he will continue to become a very considerable force in the world of drama and film."

Benâ€™s appearance on Kingston Universityâ€™s Wall of Fame came about after it decided to showcase some of its most celebrated alumni. "Ben Barnes is an inspiration, and becoming an international film star so soon after his talent was nurtured here at Kingston shows just what our students can achieve," Dr Helen Trott, Head of Development, said. The Universityâ€™s new John Galsworthy Building has provided the space to house the Wall of Fame, which will be updated as current students graduate and move up the career ladder.